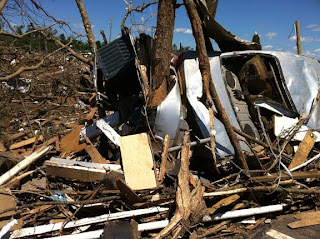 As a nationally touring sports enterprise, the Scott Firefighter Combat Challenge has made appearances in 324 locations, including 45 states and the District of Columbia over the past 20 years in a country with sometimes inhospitable weather. Starting this year in Indianapolis, we were challenged by an ice-covered tower. In Ohio a couple of weeks later, 40 mile-per-hour winds buffeted our venue.

Back in the 90’s while in Florida, we narrowly missed a couple of hurricanes. Torrential rainstorms have slowed us down, but never caused a cancellation. Even the hurricane that crossed directly over Deerfield Beach, pushing 18 inches of sand onto the parking lot didn’t completely stop us, but we did have to postpone the event.

Wind is the constant threat. With thousands of square feet of “sail,” we’re a big target for damage. In Asheville three years ago, a micro-burst of wind picked up one of our loading boxes weighing over 400 pounds and snapped a ratchet strap like it was nothing. Annually, we lose about $1000 in damages due to wind. No matter how smart we think we are, and how well secured is our stuff, Mother Nature seems to take advantage when you’re not looking.

This week in Tuscaloosa we set another record of sorts. Our four tractor-trailer units were distributed over several locations in preparation for this weekend’s event. In anticipation of a looming tornado, Chuck and Bill brought our Honda 3kW generator, a stash of energy bars and three flats of water back to the hotel. Not long thereafter, the storm hit. They were, without a doubt, the best prepared guests at the hotel and treated as heroes for thinking of a best case solution for an otherwise dreary stay.

Last year, we held an event in Albertville, Alabama about a month after a tornado hit that community. We went looking for the damage and there was a street that had been pretty torn up. That wasn’t as bad as the year we had an event in Oklahoma. I recall looking out the window of the American Airlines jet, as we flew low over the sea of blue tarps that covered thousands of roofs.

But Chuck said that this was the worst by far. Sirens were wailing until there were no more towers. The funnel skirted within a block of the hotel. Bodies were strewn across the streets and recovery continues as I write this. Our Command Trailer was parked at the Fire Academy. One of the buildings there was ripped from its foundation. Our operations center, manufactured by Hercules was spun around and pushed up against the fence without any damage.

The Tower and the Dorsey Performance car-carrier trailer were unscathed. It took several hours to access the Kentucky semi because it was staged behind a barricaded area of the city where significant damage occurred. When Chuck and Bill reached the unit they were pleased to see that a banner that was affixed to the unit with bungee cords was still in tack.

We will be back to Tuscaloosa. Given the widespread devastation, it will take the hosts, the TFD some time to sort out their immediate needs and go back to the drawing boards. We thank all of your for your expressions of sympathy for the loss of life and widespread destruction that has been meted out to the unfortunate residents of Tuscaloosa.

Monday, we head West to Lake Charles, LA. Hopefully this time, we’ll have a rather mundane weather system riding along with us. After all, we need a break!
Posted by Paul O. Davis, Ph.D. at 12:29 AM No comments:

What’s Lactate Got to do With It?

In my last Blogspot, I discussed the theoretical model for a World Record on the Scott Firefighter Combat Challenge course. The assumption was that running full out, based on the fastest splits recorded (casually), 1:05 would be about it for a relay team. But for an individual, the limiting factor is not the time, but actually the lactate threshold.

Exercise that is performed as a “pay as you go” activity is called aerobic energy because you can metabolize glucose at a rate that allows turnover. But when the intensity is increased, the products of combustion- carbon dioxide, water and lactate cannot be dumped fast enough. Lactic acid interferes with the ability to shove more fuel in the furnace and at some point, something has to give.

Dr. Timothy Noakes, from the University of Cape Town is arguably the world’s leading authority on the subject of lactate measurement and its impact on sport performance. His research has changed a lot of how we think about Specificity of Training- the result being more efficiencies in recycling the lactate with a resistance to fatigue. For the Scott Firefighter Combat Challenge, strength is not the issue; power is.

There may be some opportunities in the not too distant future to conduct some applied research among our Challenge competitors to understand better how specific training can create new breakthroughs. Measuring blood lactate in the field has benefited greatly through micro-electronics. In the early 90’s we were collecting blood samples in micro-pipettes from finger pricks and assaying them in a laboratory with the assistance of various chemical cocktails. Now, you can get the same data instantly with hand-held meters.

I’ve maintained from our inception that we can train a lot smarter, with less time and better results if we know where we are on periodization. I also believe that many of our athletes unfortunately subscribe to the theory that anything worth doing is worth overdoing. Fatigue increases the risk of injury; rest is an essential factor in recovery and must be planned for. Residual muscle soreness is a clue that you’re not ready to resume training.
Posted by Paul O. Davis, Ph.D. at 7:07 AM No comments:

The Human Limits of a World Record

In the very early years of the Scott Firefighter Combat Challenge, the two minute barrier seemed to be daunting. Could someone actually break two minutes? In the context of a historical sports event, it seemed to be up there with the four minute mile. As an ingenue sport, Challenge competitors brought their personal experience in athletics to the competition. Almost everyone had participated in organized sport at the high school or collegiate level.

Training was not a foreign concept, but specificity of training was not widely practiced. For example, pulling a Honda up a hill with a shoulder harness was one unique modality. If you were an endurance athlete, like a cyclist, then that was what you knew best and how you trained. Traditional strength training had a lot of followers, with the mistaken belief that getting stronger would somehow convert into becoming faster. When adding 75 pounds to a PR failed to evoke a change on the course, a lot of competitors started to re-examine their workouts.

Today, top competitors have scientific regimens prepared by kinesiologists and personal trainers- all the amenities found at the Olympics or other world-class competitions. Rest, and active rest have assumed importance in the workout cycle. Breaking down the components into splits allows athletes to determine where they are relative to being on a PR pace and when they need to break off training to allow recovery.

Answering the question, “What are the human limits of a near perfect run?” comes the introspective analysis of Mike Mederios, team captain of Horry County. Mike, using data from the best of the best splits created a theoretical perfect storm. Here are the splits, based upon the Relay. The relay was originally conceived as a way of determining how fast the course could be run if every event was completed at terminal velocity.

The current World Record (WR) Relay time held by Clayton County (GA) is a stunning 1:07.74. Bob Russell’s (Overland Park, KS) single run of 1:19.02, now 10 years old continues to be the speed chimera. The conditions at this year’s venue will be near perfect. A flat platform with excellent foot traction. Weather and wind cooperating. Now, with a heated tray, you have a constant coefficient of friction on the Keiser Force Machine. Could this be the year? There’s a lot of time between now and November 18. The tension builds.
Posted by Paul O. Davis, Ph.D. at 3:18 AM No comments: