Two years ago, we started an initiative to put the Challenge on the weather deck of the USS Midway. In furtherance of that objective, Chuck DeGrandpre and Bill Alexander made two trips to San Diego and conducted several meetings with the Burn Foundation as well as the organization that manages the Midway. Things were on track and we had indicated that San Diego would be our destination. The terms of the contract had been negotiated and was awaiting ratification.
Then, the engineering department asked if we could punt this to next year. Keep in mind that we had started with an objective of 2011 and now were being asked to move the event to 2013. We felt that we had exhausted all remedies in attempting to bring some structure to what would have been a very complicated maneuver. So, in deference to our West Coast teams, we also felt strongly that we needed to be in California as originally planned. So several months ago, we started our search for an alternative venue.
Our short list of venues numbered in single digits. Each of these locations were presented with the specifications necessary to run a quality event. Hundreds of hours have been spent, not just by us, but Walt White, Cliff Walker and Bob Pfohl. At first, the US Navy looked to be the solution and we were well on our way to securing a venue when a conflict with the change of command ceremony knocked that one out and set us back another several weeks.
We apologize for this frustrating and unfortunate set of circumstances. Nearly every hour of Rob Alesbury's time has been on the phone, trying to move this project along. As of this writing, we believe that we are close to making an announcement of a San Diego venue. The instant that we can confirm the location, we will announce it here on the Hot News. Meanwhile, special thanks to Bob Pfohl, Cliff Walker and Walt White for their tireless volunteer efforts. Without guys like them, we couldn’t do this.
Posted by Paul O. Davis, Ph.D. at 10:51 AM No comments:

Since it's inception nearly 22 years ago, there's probably 100,000 Challenge tees out there. I wanted to share this special one- because it's one of the most creative that I've seen. It was the competitor tee from Berlin week before last. Here's the backside:


Now, here's the good part:
The translation goes like this:

Every morning in Africa a gazelle wakes up and she knows she needs to be quicker than the fastest lion or she will die.

Every morning, a lion wakes up and knows that he will have to overtake the gazelle or he will starve.
When the sun comes up, it does not matter if whether you're the lion or the gazelle, you better be training!

Over twenty years ago, I was told by a physician friend of the daily fitness test taken by every Parisian firefighter. I couldn't independently verify this- at least until this week. But it's true.

I met a contingent of 10 Parisian firefighters at the Berlin Firefighter Combat Challenge. They invited me to visit their station, which I did last Monday (9,10.12).

It took a couple of Metro trains and some walking, but I arrived at the Landon station, just as Google Earth had directed. The station captain introduced himself and provided a tour of the fire house. The building was huge, with a full galley, training room, spacious engine bay and a well-equiped workout room. We discussed work schedules and shifts and the usual casual conversation that fills the voids when visiting firehouses.

But what I really wanted to know was about the mandatory daily fitness test that my physician friend had told me about over two decades ago. Yep; absolutely. And a demonstration was ordered. Affixed to the wall at about 8 feet is a 1.5" thick shelf about 24" deep, held in place with a set of braces.  The firefighter, wearing full bunkers, (unlike the photo) grasps the edge of the shelf and pulls himself up and onto the shelf. That's it. Just that simple.

If you can't do that, you don't ride the apparatus that day, or any day until you can pass the daily fitness test. I don't know what percentage of US firefighters that would be capable of passing this simple test. I'm pretty sure everyone who participates in the Scott Firefighter Combat Challenge can. But think about it. What could be a simpler field test of muscular fitness than the ability to move your own body weight (and bunker gear- absent SCBA) to a ledge?

Imagine the huge economic savings in orthopedic injuries and reduced metabolic diseases like diabetes if we could boast this level of fitness for an elite class of firefighters. Then certainly, "Everyone would be going home." 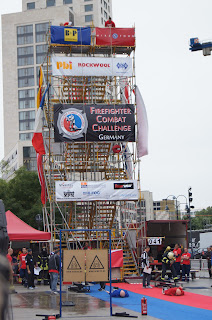 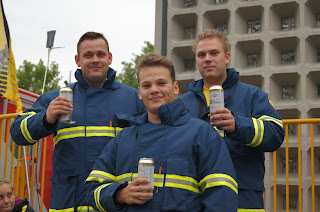 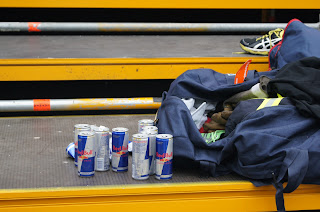 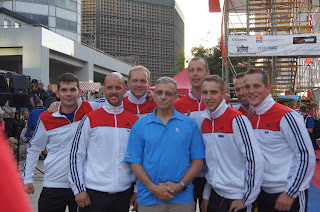