#1 In more than half of all states, the highest paid public employee is a football coach.

#3 Almost half of all Americans (47 percent) do not put a single penny from their paychecks into savings.
#4 Apple corporation has more cash than the U.S. Treasury.
#5 Alaska is 429 times larger than Rhode Island, but R.I. has a much larger population.

#6 Alaska has a longer coastline than all the other 49 states combined.

#7 The city of Juneau, Alaska, measures about 3,000 square miles. It's larger than the entire state of Delaware.

#8 When LBJ's "War on Poverty" began, less than 10 percent of all U.S. children were growing up in single-parent households. Today, that number is 33 percent.

#13 The average supermarket in the US wastes about 3,000 lbs of food each year; and, about 20 pct. of garbage in our landfills is food.

#14 Recent survey: 81 pct. of Russians now have a negative view of the US - much higher than during the Cold War era.

#16 The grizzly bear remains the official state animal of CA., but none have been seen there since 1922. They are plentiful in Mississippi and other southern states.

#17 A survey found that "A steady job" is the number one thing that American women look for in a husband; and, 75 pct. of them would have serious problems dating unemployed men.

#18 According to a study by Economist Carl Frey and Engineer Michael Osborne, up to 47 pct. of jobs in the U.S. may be lost to computers, robots and other technology.

#19 The only state where coffee is grown commercially: Hawaii.

#20 The original name of the city of Atlanta was "Terminus."

#21 The state with the most millionaires per capita is Maryland.

#24 Nearly half of all U.S. homes have NO emergency supplies. Even fewer have fire extinguishers.

From the Kingdom of Kuwait 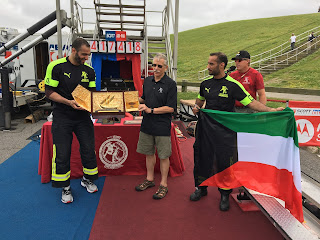 This marks the third season that members of the fire service from the Kingdom and or Oil Company of Kuwait have participated in the Scott Firefighter Combat Challenge.

In Apopka, Florida, two representatives of Kuwait competed in our event there. The following week, they also traveled to Virginia Beach.

I was pleasantly surprised with the presentation pictured below. The Kuwaiti's historically renowned for their intrepid sailing skills have adopted the image of a sailboat as their county's "branding-logo."

We look forward to seeing the full contingent in Louisville this year. 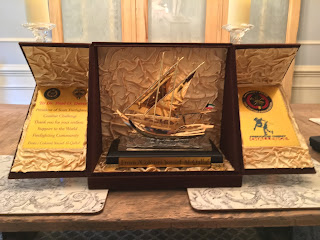 Why do they even play the game?


In mathematics, when you’re convinced of some eternal truth but can’t quite prove it, you offer it as a hypothesis (with a portentous capital H) and invite the world, future generations if need be, to prove you right or wrong. Often, a cash prize is attached.

In that spirit, but without the cash, I offer the Krauthammer Conjecture: In sports, the pleasure of winning is less than the pain of losing. By any Benthamite pleasure/pain calculation, the sum is less than zero. A net negative of suffering. Which makes you wonder why anybody plays at all.

Winning is great. You get to hoot and holler, hoist the trophy, shower in champagne, ride the open parade car and boycott the White House victory ceremony (choose your cause).

But, as most who have engaged in competitive sports know, there’s nothing to match the amplitude of emotion brought by losing. When the Cleveland Cavaliers lost the 2015 NBA Finals to Golden State, LeBron James sat motionless in the locker room, staring straight ahead, still wearing his game jersey, for 45 minutes after the final buzzer.

Here was a guy immensely wealthy, widely admired, at the peak of his powers — yet stricken, inconsolable. So it was for Ralph Branca, who gave up Bobby Thomson’s shot heard ’round the world in 1951. So too for Royals shortstop Freddie Patek, a (literal) picture of dejection sitting alone in the dugout with his head down after his team lost the 1977 pennant to the New York Yankees.


In 1986, the “Today Show” commemorated the 30th anniversary of Don Larsen pitching the only perfect game in World Series history. They invited Larsen and his battery mate, Yogi Berra. And Dale Mitchell, the man who made the last out. Mitchell was not amused. “I ain’t flying 2,000 miles to talk about striking out,” he fumed. And anyway, the called third strike was high and outside. It had been 30 years and Mitchell was still mad. (Justly so. Even the Yankee fielders acknowledged that the final pitch was outside the strike zone.)

For every moment of triumph, there is an unequal and opposite feeling of despair. Take that iconic photograph of Muhammad Ali standing triumphantly over the prostrate, semiconscious wreckage of Sonny Liston. Great photo. Now think of Liston. Do the pleasure/pain calculus.

And we are talking here about professional athletes — not even the legions of Little Leaguers, freshly eliminated from the playoffs, sobbing and sniffling their way home, assuaged only by gallons of Baskin-Robbins.

Any parent can attest to the Krauthammer Conjecture. What surprises is how often it applies to battle-hardened professionals making millions.

I don’t feel sorry for them. They can drown their sorrows in the Olympic-sized infinity pool that graces their Florida estate. (No state income tax.) I am merely fascinated that, despite their other substantial compensations, some of them really do care. Most interestingly, often the very best.

Max Scherzer, ace pitcher for the Washington Nationals, makes $30 million a year. On the mound, forget the money. His will to win is scary. Every time he registers a strikeout, he stalks off the mound, circling, head down, as if he’s just brought down a mastodon.

On June 6, tiring as he approached victory, he began growling — yes, like a hungry tiger — at Chase Utley as he came to the plate. “It was beautiful,” was the headline of the blog entry by The Post’s Scott Allen. Nats broadcaster and former ballplayer F.P. Santangelo was so thrilled by the sheer madness of it that he said “I want to run down there and put a uni on . . . I mean, I’ve got goose bumps right now.”


When Scherzer gets like that, managers are actually afraid to go out and tell him he’s done. He goes Mad Max. In one such instance last year, as Scherzer labored, manager Dusty Baker came out to the mound. Scherzer glared.

“He asked me how I was feeling,” Scherzer recounted, “and I said I still feel strong . . . I still got one more hitter in me.”

Asked Baker, demanding visual confirmation: “Which eye should I look at?”

Scherzer, who famously has one blue and one brown eye, shot back: “Look in the [expletive] brown eye!”

“That’s the pitching one,” he jokingly told reporters after the game.

Baker left him in.

After losing her first ever UFC match, mixed martial artist Ronda Rousey confessed that she was in the corner of the medical room, “literally sitting there thinking about killing myself. In that exact second, I’m like, ‘I’m nothing.’ ” It doesn’t get lower than that.

Said Vince Lombardi, “Winning isn’t everything. It’s the only thing.” To which I add — conjecture — yes, but losing is worse.

Read more from Charles Krauthammer’s archive, follow him on Twitteror subscribe to his updates on Facebook.
Posted by Paul O. Davis, Ph.D. at 3:35 PM No comments: