Augustine's laws were a series of tongue in cheek aphorisms put forth by Norman Ralph Augustine, an American aerospace businessman who served as Under Secretary of the Army from 1975 to 1977. In 1984 he published his laws.

I enjoyed the humor, and thought that you might as well...

Law Number I: The best way to make a silk purse from a sow's ear is to begin with a silk sow. The same is true of money.

Law Number II: If today were half as good as tomorrow is supposed to be, it would probably be twice as good as yesterday was.

Law Number III: There are no lazy veteran lion hunters.

Law Number IV: If you can afford to advertise, you don't need to.

Law Number V: One-tenth of the participants produce over one-third of the output. Increasing the number of participants merely reduces the average output.

Law Number VIII: The most unsuccessful four years in the education of a cost-estimator is fifth-grade arithmetic.

Law Number IX: Acronyms and abbreviations should be used to the maximum extent possible to make trivial ideas profound...Q.E.D.

Law Number X: Bulls do not win bullfights; people do. People do not win people fights; lawyers do.

Law Number XIII: There are many highly successful businesses in the United States. There are also many highly paid executives. The policy is not to intermingle the two.

Law Number XIV: After the year 2015, there will be no airplane crashes. There will be no takeoffs either, because electronics will occupy 100 percent of every airplane's weight.

Law Number XV: The last 10 percent of performance generates one-third of the cost and two-thirds of the problems.

Law Number XVI: In the year 2054, the entire defense budget will purchase just one aircraft. This aircraft will have to be shared by the Air Force and Navy 3-1/2 days each per week except for leap year when it will be made available to the Marines for the extra day.

Law Number XVII: Software is like entropy. It is difficult to grasp, weighs nothing, and obeys the Second Law of Thermodynamics; i.e., it always increases.

Law Number XVIII: It is very expensive to achieve high unreliability. It is not uncommon to increase the cost of an item by a factor of ten for each factor of ten degradation accomplished.

Law Number XIX: Although most products will soon be too costly to purchase, there will be a thriving market in the sale of books on how to fix them.

Law Number XX: In any given year, Congress will appropriate the amount of funding approved the prior year plus three-fourths of whatever change the administration requests, minus 4-percent tax.

Law Number XXI: It's easy to get a loan unless you need it.

Law Number XXII: If stock market experts were so expert, they would be buying stock, not selling advice.

Law Number XXIII: Any task can be completed in only one-third more time than is currently estimated.

Law Number XXIV: The only thing more costly than stretching the schedule of an established project is accelerating it, which is itself the most costly action known to man.

Law Number XXV: A revised schedule is to business what a new season is to an athlete or a new canvas to an artist.

Law Number XXVI: If a sufficient number of management layers are superimposed on each other, it can be assured that disaster is not left to chance.

Law Number XXVII: Rank does not intimidate hardware. Neither does the lack of rank.

Law Number XXIX: Executives who do not produce successful results hold on to their jobs only about five years. Those who produce effective results hang on about half a decade.

Law Number XXXI: The optimum committee has no members.

Law Number XXXII: Hiring consultants to conduct studies can be an excellent means of turning problems into gold, your problems into their gold.

Law Number XXXIV: The process of competitively selecting contractors to perform work is based on a system of rewards and penalties, all distributed randomly.

Law Number XXXV: The weaker the data available upon which to base one's conclusion, the greater the precision which should be quoted in order to give the data authenticity.

Law Number XXXVI: The thickness of the proposal required to win a multimillion dollar contract is about one millimeter per million dollars. If all the proposals conforming to this standard were piled on top of each other at the bottom of the Grand Canyon it would probably be a good idea.

Law Number XXXVIII: The early bird gets the worm. The early worm...gets eaten.

Law Number XXXIX: Never promise to complete any project within six months of the end of the year, in either direction.

Law Number XL: Most projects start out slowly, and then sort of taper off.

Law Number XLI: The more one produces, the less one gets.

Law Number XLII: Simple systems are not feasible because they require infinite testing.

Law Number XLIV: Aircraft flight in the 21st century will always be in a westerly direction, preferably supersonic, crossing time zones to provide the additional hours needed to fix the broken electronics.

Law Number XLV: One should expect that the expected can be prevented, but the unexpected should have been expected.

Law Number XLVI: A billion saved is a billion earned.

Law Number L: The average regulation has a life span one-fifth as long as a chimpanzee's and one-tenth as long as a human's, but four times as long as the official's who created it.

Law Number LI: By the time of the United States Tricentennial, there will be more government workers than there are workers.

Law Number LII: People working in the private sector should try to save money. There remains the possibility that it may someday be valuable again.
Posted by Paul O. Davis, Ph.D. at 1:39 AM No comments:

Over 300 firefighters from 11 countries descended on the visitor center of Berlin for two great days of racing.

Germany, Austria, Switzerland, France, Poland, Slovenia, UK, Iran, Italy, Luxemburg, and Belgium were represented in the most impressive of walk-ons.

But, the races were even more impressive. Under the management and direction of Mike Weikamm, Berlin Fire Brigade, Individual, Tandem and Relay racers took to the course and performed admirably for thousands of locals and tourists.

Friday’s weather could not have been better; nearly cloudless skies with an ambient temperature hovering around 70°F. Saturday, while overcast, saw temps in the mid 60’s. So, overheating was not an issue.

Two videos are available for your viewing pleasure. One of the multiple sub-90-second runs, and the Relay Championship between Slovenia and Lion’s Den Germany. 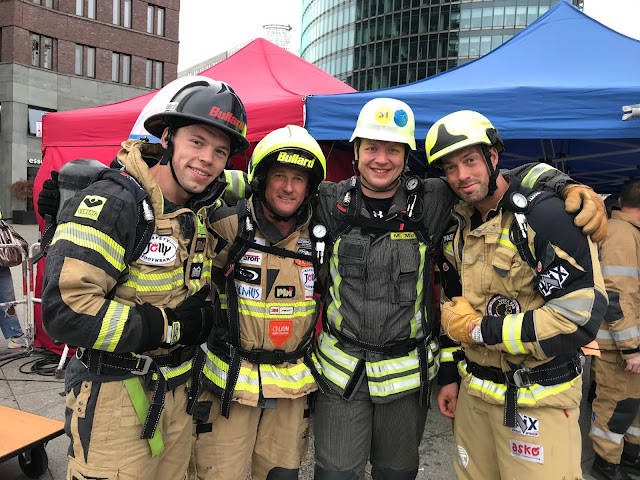 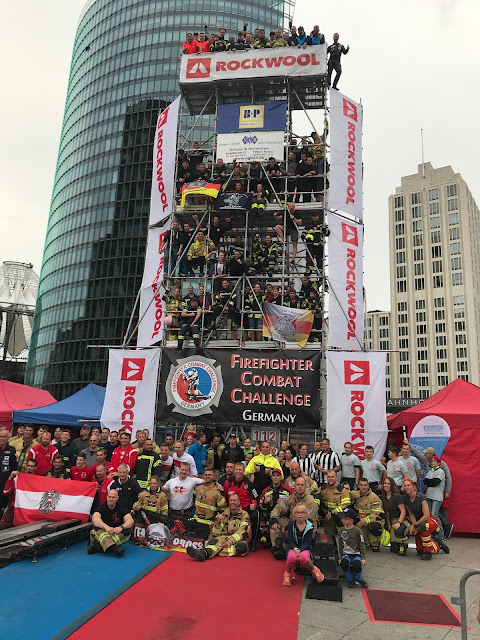 Our Salute to Tommy Sadler at the Nebraska State Fair, Grand Island

Our competitors recognized the late, great Tommy Sadler on Saturday, August 31, 2019, after the competition with a push-up fest and salutary comments. Here’s a nice piece by the NBC local affiliate. 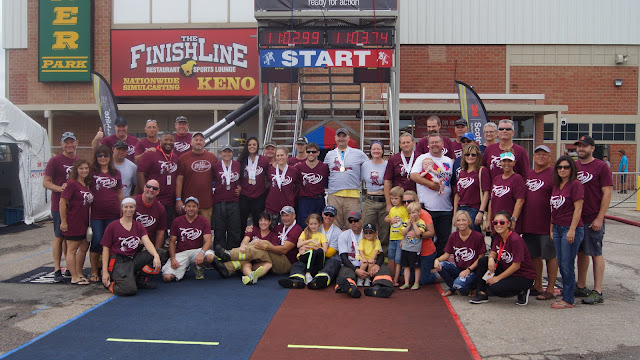 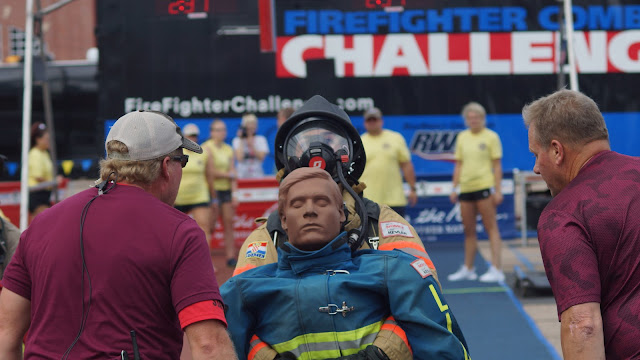 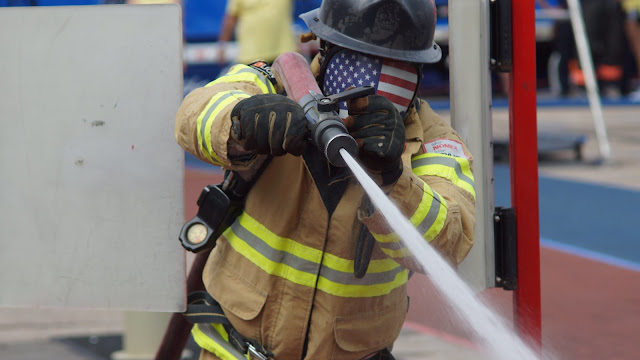 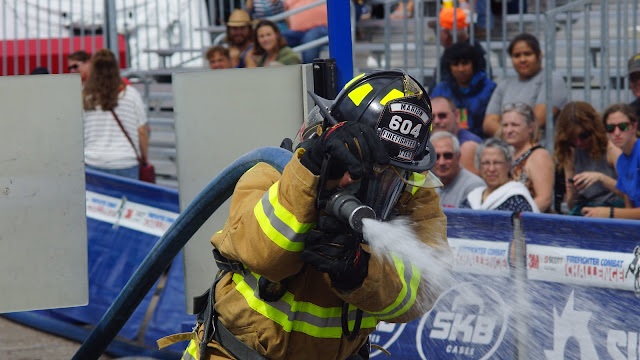 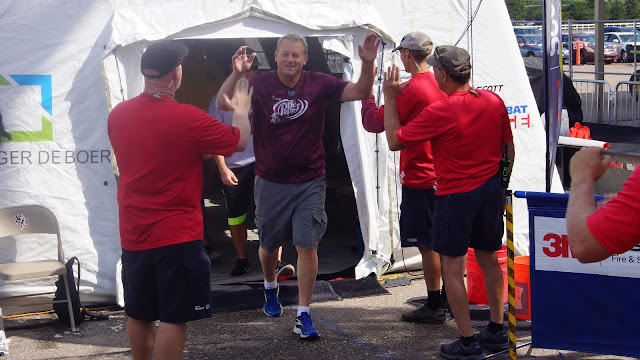 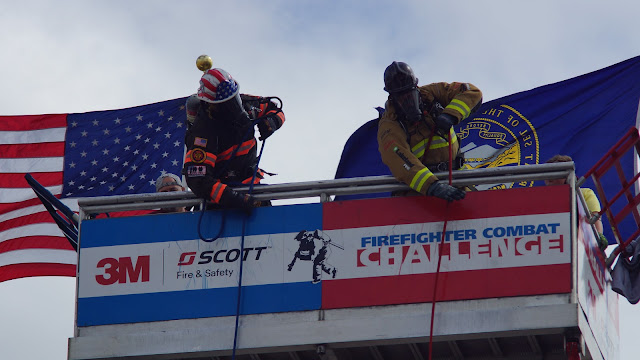