Rescue Randy: Where are You?

This would be funny if it were not a felony for Grand Theft (≈$2K).

I can think of a host of gags that will continue 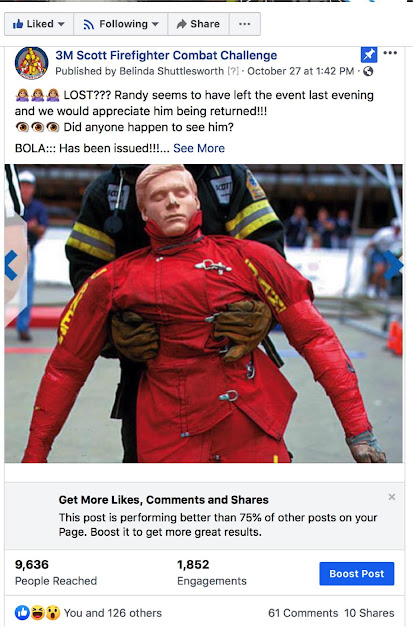 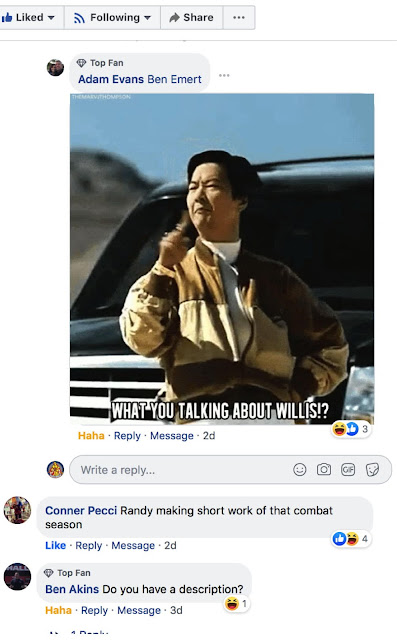 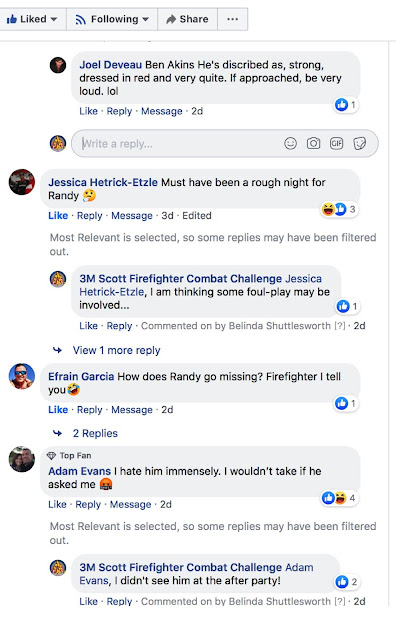 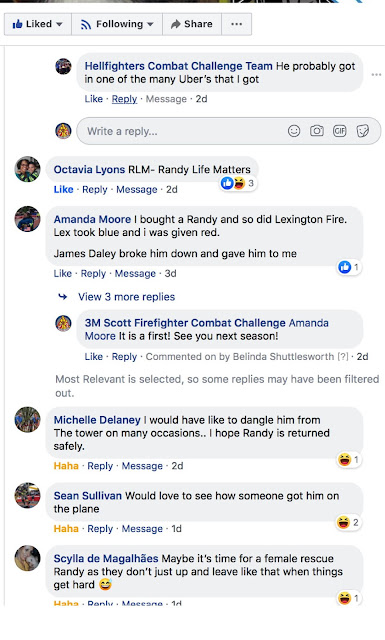 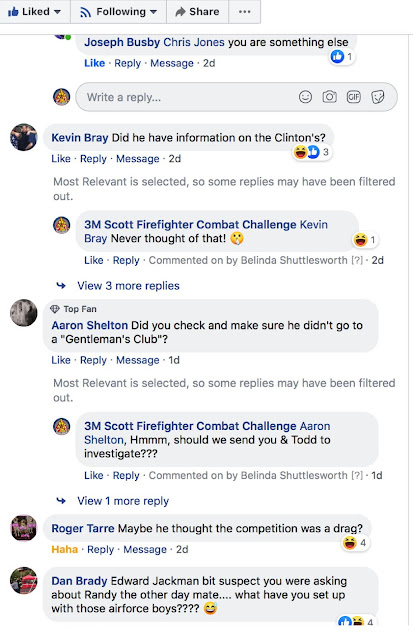 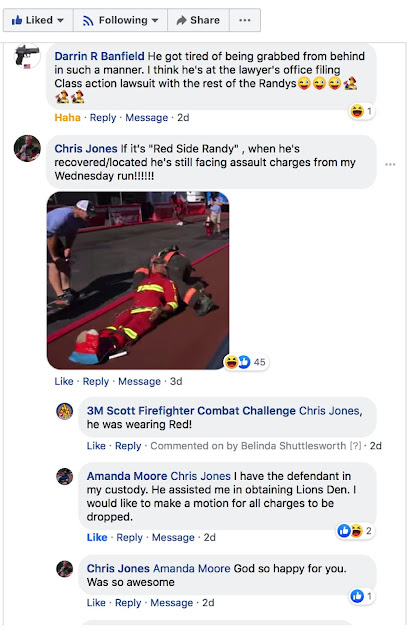 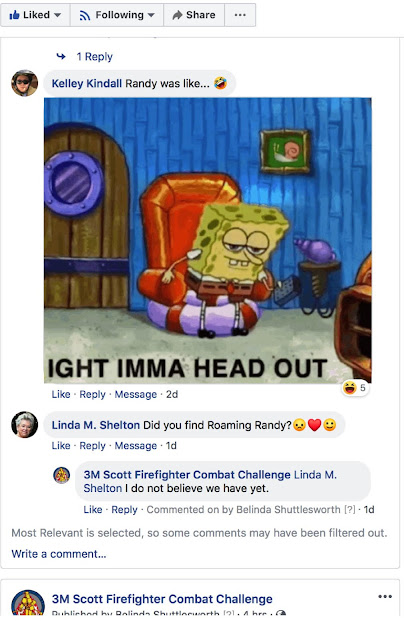 “Get what you want without compromise”

That’s the call of our times.

Run a marathon without getting tired.
Lose weight without dieting.
Get ahead without working hard.
Earn big money without risk…
When you expose it this clearly, it’s obviously nonsense. Compromise is precisely what’s called for.
You can’t have everything you want. But, if you care enough and trade enough and work hard enough, you might be able to get some things that matter.
The real question might not be, “what do you want,” it might be, “what do you care enough to compromise for?”
From Seth Godin’s daily email; I thought that you would relate.
Posted by Paul O. Davis, Ph.D. at 2:20 AM No comments:

Upon packing up, it appeared that Rescue Randy wandered away while wearing a red Nomex suit.

This is a first; a brand-new Rescue Randy disappeared sometime after the event on Saturday and was discovered missing Sunday morning.

He was staged between the Registration trailer and the tower.

Please keep your eyes and ears peeled for any leads.

Worked for Me; How About You? 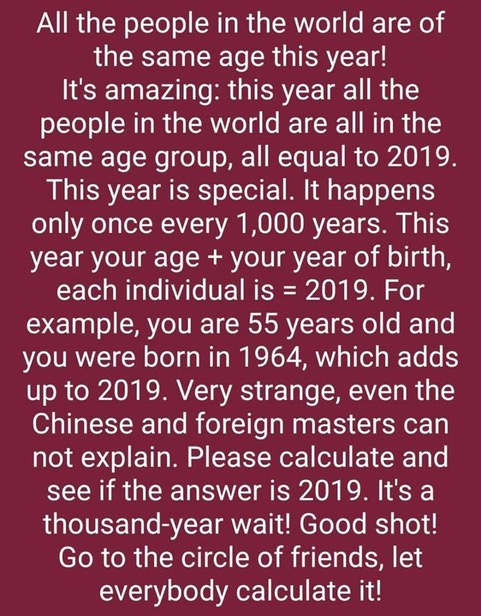 More and more studies are showing how regular exercise benefits the brain, and in particular, the aging brain. What’s less clear is how exactly exercise counters the cognitive decline that comes with aging and diseases like Alzheimer’s.


Just 10 Minutes of Exercise a Week May Be Enough to Extend Your Life, Study Says
Exercising for just 10 minutes a week is linked to a longer life, according to a new study published in the British Journal of Sports Medicine.


To find out, for nearly a decade, Ozioma Okonkwo, assistant professor of medicine at the University of Wisconsin School of Medicine and Public Health and his colleagues have studied a unique group of middle-aged people at higher risk of developing Alzheimer’s. Through a series of studies, the team has been building knowledge about which biological processes seem to change with exercise. Okonkwo’s latest findings show that improvements in aerobic fitness mitigated one of the physiological brain changes associated with Alzheimer’s: the slowing down of how neurons breakdown glucose. The research, which has not been published yet, was presented at the annual meeting of the American Psychological Association on Aug. 9.


Okonkwo works with the 1,500 people on the Wisconsin Registry for Alzheimer’s Prevention (WRAP)—all of whom are cognitively normal, but have genes that put them at higher risk of developing Alzheimer’s, or have one or two parents who have been diagnosed with the disease, or both. In the latest study, Okonkwo recruited 23 people from the WRAP population who were not physically active. Eleven were asked to participate in an exercise regimen to improve their aerobic fitness for six months, and 12 served as the control. All had their brains scanned to track Alzheimer’s-related brain changes including differences in how neurons metabolized glucose, since in people with Alzheimer’s glucose breakdown slows. At the end of the study period, the group that exercised more showed higher levels of glucose metabolism and performed better on cognitive-function tests compared to the controls.

“We are carrying our research full circle and beginning to demonstrate some causality,” says Okonkwo about the significance of his findings.


In their previous work, he and his team identified a series of Alzheimer’s-related biological changes that seemed to be affected by exercise by comparing, retrospectively, people who were more physically active to those who were not. In this study, they showed that intervening with an exercise regimen could actually affect these processes. Taken together, his body of research is establishing exactly how physical activity contributes to significant changes in the biological processes that drive Alzheimer’s, and may even reduce the effect of strong risk factors such as age and genes linked to higher risk of neurodegenerative disease.


For example, in their earlier work his group confirmed that as people age, the presence of Alzheimer’s-related brain changes increases—including the buildup of amyloid, slower breakdown of glucose by brain cells, shrinking of the volume of the hippocampus (central to memory), and declines in cognitive function measured in standard recall and recognition tests.

But they found that in people who reported exercising at moderate intensity at least 150 minutes a week, as public health experts recommend, brain scans showed that these changes were significantly reduced and in some cases non-existent compared to people who were not active. “The association between age and Alzheimer’s brain changes was blunted,” says Okonkwo, “Even if [Alzheimer’s] got worse, it didn’t get worse at the same speed or rate among those who are physically active as in those who are inactive.”

In another previous study, they found the benefits of exercise in controlling Alzheimer’s processes even among those with genetic predisposition for the disease. When they divided the participants by fitness levels, based on a treadmill test and their ability to efficiently take in oxygen, they found that being fit nearly negated the effect of the deleterious gene ApoE4. “It’s a remarkable finding because it’s not something that was predicted,” says Okonkwo.

Given the encouraging results from his latest study of 23 people that showed intervening with exercise can change some of the Alzheimer’s-related brain changes of the disease, he plans to expand his small study to confirm the positive effect that exercise and better fitness can have in slowing the signs of Alzheimer’s. Already, his work has inspired a study launched earlier this year and funded by the National Institutes of Health that includes brain scans to track how physical activity affects biological factors like amyloid and glucose in people at higher risk of developing Alzheimer’s. The cumulative results show that “there may be certain things we are born with, and certain things that we can’t change [when it comes to Alzheimer’s risk], but a behavior like physical exercise might help us to modify that,” says Heather Snyder, vice president of medical and scientific relations at the Alzheimer’s Association.
Posted by Paul O. Davis, Ph.D. at 3:51 AM No comments:

The Origins of the Firefighter Combat Challenge

From time to time, the question comes to me, be it in a TV interview, or just a new Competitor: “Where did this (meaning the Firefighter Combat Challenge®) come from?” Short answer: “This is the only federally funded, University-based, occupational physiology research study that became an international touring and televised sport.”

The Sports Medicine Center of the University of Maryland’s School of Public Health was the recipient of a grant from the predecessor of FEMA.
In cooperation with the Fire Training Officer’s sub-committee of the Greater Washington DC Council of Governments (GOG) I conducted a JTA (job task analysis). This is the process whereby essential functions of the position (firefighter) are identified and quantified. Our criteria were a search for arduous, frequently performed or critical tasks. Critical means that failure could result in injury or death. The validity of the five linked tasks is evident with the world-wide acceptance and promulgation of the Challenge. There are professional and legal standards that must be met to withstand the rigor of publication in peer-reviewed journals. The results of our study were published in the journal of the American College of Sports Medicine (Medicine and Science in Sports and Exercise).  But beyond a competition, the higher standard is being able to defend against legal challenges when the arduous nature of the profession has a disparate impact on “protected classes.” And then there’s a lot of steps from a research study to the development of a copyrighted, trademarked competition and all of the intricacies associated with over 60,000 participants spanning nearly three decades. While imitation is the highest form of flattery, it is disconcerting when your intellectual property is hijacked and represented to be the creation of their own. Simply stated, there is no form of firefighter testing or competition involving a tower, forcible entry, hose advance and a victim rescue that is not a derivative of the Firefighter Combat Challenge®. My vision for the Challenge is that there is only one right way to run this event. When people start to change the fundamentals, we lose respect for the objectivity of the event. There’s only one 440 yard dash and the performance time has universal credibility.
Posted by Paul O. Davis, Ph.D. at 3:13 AM 1 comment: