We would like everyone who steps out on the Scott Firefighter Combat Challenge course to have a positive experience. By this, we mean finishing under your own power with something left in the gas tank.

The only shortcut in the Challenge is preparation. Our website is replete with a host of training programs. One of the most important considerations is a realistic finish time. Coming in with a preconceived time, without the parallel experience is not the best way to attack the course.
Knowing your limitations and running your own race are very important considerations. Oftentimes, the competitive impulse kicks in and you’ve determined that the guy in the next chute will never beat you to the top of the tower. The problem here is that finish line is behind you, not the top of the stairs and you have no idea of the capabilities of your opponent.
When guys start having problems, it’s the responsibility of the lane grader to protect you from yourself. Having watched several thousand races, these guys are pretty astute at knowing who’s outside of their comfort zone. The crowd loves to extend their sympathy and energy and this now creates an environment that can exacerbate the problem. I mean, some of our competitors would seemingly rather die that quit. And we don’t want that to happen.
There is a Six Minute Rule, meaning, we’ll terminate your run if you’re not done in 6. But, that’s pretty generous and lacks precision as to the metabolic status of the racer. So, here’s some Guidelines for our officials as to when to pull the plug.
1. Competitor has repeatedly dropped the dummy
2. It’s 5:00 elapsed time and the halfway point on the dummy drag has not been reached
3. There’s no forward progress being made
We want to intervene at the point where recovery can take place with the Competitor walking off the course under their own power.
A few words about recovery:
No matter how inviting are those chairs in the rehab area, resist sitting down.
Drink only water within 20 minutes of competing- unless you want to see that sports drink again.
The Pit Crew will assist in getting your bunkers off.
Walk briskly after running. The faster you move, the faster you’ll recover.
If you can’t keep fluid down, you’ll need an I.V.
We don’t want anyone leaving until they can produce urine.
For any first-timer that does not finish, we’ll extend a 50% discount on the next event in which they compete.
Posted by Paul O. Davis, Ph.D. at 3:16 PM No comments:

Exercise Makes You Younger at the Cellular Level

The more exercise people get, the less their cells appear to age. In a new study in Preventive Medicine, people who exercised the most had biological aging markers that appeared nine years younger than those who were sedentary.

Researchers looked at the telomeres from nearly 6,000 adults enrolled in a multi-year survey run by the Centers for Disease Control and Prevention. People were asked what physical activities they had done in the past month and how vigorously they did them. They also provided DNA samples, from which the researchers measured telomere length. Telomeres, the protein caps on the ends of human chromosomes, are markers of aging and overall health. Every time a cell replicates, a tiny bit of telomere is lost, so they get shorter with age. But they shrink faster in some people than in others, explains study author Larry Tucker, professor of exercise science at Brigham Young University.

“We know that, in general, people with shorter telomeres die sooner and are more likely to develop many of our chronic diseases,” says Tucker. “It's not perfect, but it's a very good index of biological aging.”

MORE: Here's Why You May Be Aging Faster Than Your Friends

After adjusting for smoking, obesity, alcohol use, gender, race and other factors, Tucker found in his study that people who exercised the most had significantly longer telomeres than those who were sedentary. The most sedentary people had 140 fewer base pairs of DNA at the ends of their telomeres, compared to the most active: a difference of about nine years of cellular aging, he says

To qualify as top-tier exercisers, people had to do the equivalent of at least 30-40 minutes of jogging a day five days a week. Doing less was also linked to aging benefits, but they were not as powerful. People who did vigorous exercise had telomeres that signaled about seven fewer years of biological aging, compared to people who did moderate levels of activity.

Tucker says he was surprised to see so big of a difference between moderate and high levels of exercise. “Moderate exercise was still valuable and it had some benefit, but it was really those high levels of physical activity that made the real difference,” says Tucker. The top exercisers were vigorously working out 150 to 200 minutes a week, or engaging in light- to moderate-intensity activity for longer periods. Research continues to suggest that more exercise means deeper reductions in risk for chronic disease, to a certain point.

The current study relied on self-reports about physical activity and was only able to show an association—not a cause-and-effect relationship—between exercise amount and telomere length. It wasn’t able to account for factors like depression, stress, sleep disturbances and dietary practices that could affect exercise habits, genetic changes, or both.

But a link between physical activity and cellular aging makes sense, says Tucker. Experts believe that telomere length may be linked to inflammation and oxidative stress, both of which exercise has been shown to ease over time.

While there’s no guarantee that people with longer telomeres will live longer, healthier lives, the odds may be in their favor, says Tucker. “We all know people who seem younger than their actual age,” he says. “We know exercise can help with that, and now we know that part of that may be because of its effect on our telomeres.”
Posted by Paul O. Davis, Ph.D. at 2:16 PM No comments:

The Etiology of the High Rise Bundle 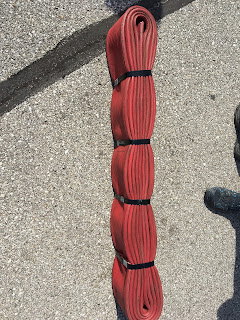 From time to time, I field questions about the legacy of the various events or tasks that comprise the Firefighter Combat Challenge®.
For about 20 years now, I’ve been seeking a solution for the high rise bundle that would make it impervious to inclement weather. There are fabric treatments, especially the one produced by Rust-Oleum. Untreated, the 42 pound bundle can soak up four pounds of water. Rather than attempt to make changes during the season, we determined that the Winter of ’16-17 would be the best time to effect the upgrade.
For those of you at FDIC last week, you saw the 4” rubber-jacketed high-rise bundle. We started with four steel bands, but have determined that we can probably reduce the number by moving them more to the center. Because rubber jacketed hose is more dense, the actual volume is less.
I’ve weighed packs all over the country. Whether you call them hotel or hospital bundles, or whatever, they’re intended use is for interior fire suppression by hooking up to the riser system. Typically, the bundle includes spanner wrenches, reducer or gated wye and a nozzle. Forty-two pounds is pretty much on the light side. But, I’m interested in what the weight and configuration is at your station.
Send me photos and descriptions to: Dr.Paul
We’ll continue to tweak the bundle to get the most optimal ergonomics- flexible and conforming to your shoulder, falling naturally such that it stays put when you're climbing.
Posted by Paul O. Davis, Ph.D. at 1:30 AM No comments: