And Then There’s This: Bagpipes on Thunderstruck?

You have just got to watch this: Buddhist Monk doing AC/DC “Thunderstruck”

It may be a long way to the top if you want to rock and roll, but Japanese Buddhist monk Kossan1108 makes it look easy.

Ross Lowery, retired Battalion Chief, Moline (IL) Fire Department passed away at the age of 82 on December 30. I had a lengthy telephone call with Ross on his birthday, the 18th of this month. He sounded tired but still enjoyed reflecting on the early days when we were making things up as we went.

I could make a good head start on a major book, telling stories about Ross. In the early ’90s, our company was conducting 5-day, 40-hour Certified Fitness Coordinator training programs for fire departments all over the country. In total, we did over 100 of these schools for everyone under the sun in the Public Safety and military markets. And, that’s where we met Ross- clearly a standout with a common interest.

Ross was in his last years as a career firefighter and was looking forward to his next adventure. He was interested in physical fitness and the Challenge was just getting started. Our first event in 1992 was in central Florida. We had assembled the minimum set of equipment and were looking for a way to get it to the Academy. Ross had a beat-up four-banger Ford Ranger pickup and offered to haul it.

We rented an equally beat-up U-Haul trailer, with holes in the floorboards and Ross was off, braving a snowstorm on the way South. That worked for events not too distant. So, we did a deal with North American Van Lines for the rest of the season.

Ross came back with an offer: he’d do it for what we were paying North American. He went out and purchased a half-ton Chevy pickup and we secured a donation of a trailer from Pace American. Packing the trailer became a real challenge and we were introduced to Jim Hackney and Eddie Smith of the Hackney beverage body frame fame. International Navistar made the contribution of a tractor and we were off.

Ross was a student of all things mechanical. While at the Hackney plant, we engaged Mr. Hackney in a discussion about SCBAs and the weight of air. Right on the spot, Ross had mentally calculated what the weight of air in a 30-minute bottle would be. Mr. Hackney resorted to the Physicist’s Handbook and we did the math. Ross was right. It’s a little over 3 pounds of breathing air in a cylinder.

Scott came on board in 1994 and we now had a standardized tower, versus the drill towers at local fire departments that we were using. We got pretty good at erecting scaffolding until the advent of our prototype tower.

The photograph of Ross and an unknown homeless guy erecting the tower in Miami in 1996 brings back a hilarious memory. The guy wanted to help and we were not in a position to refuse. Once the tower was up, having no overnight security, Ross offered him the shelter of the cab of our tractor. The next morning, the helper and Ross’s shoes had disappeared. Ross opined, that clearly, the guy needed them more than he did. 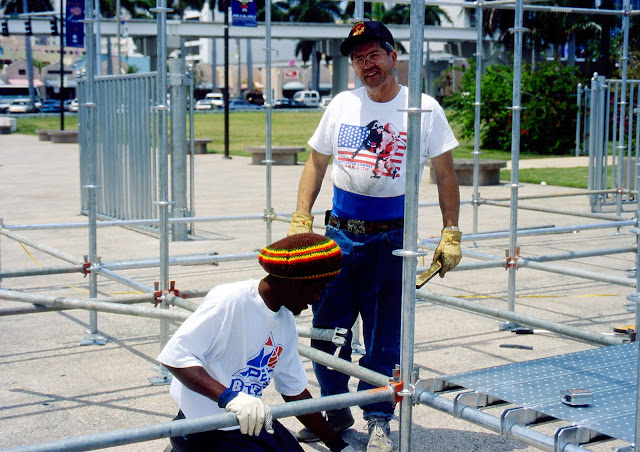 When I spoke with Ross’s wife Rose, I told her that my mind was flooded with hilarious stories of Ross, who never met a machine that he could not fix or firefighters that he did not like. On one of his many cross-country drives, he lost the drive shaft of our tractor in Utah. Ross walked the median looking for the parts when he encountered a motorist whose tire had been damaged by the flotsam of debris from our unfortunate experience. Ross quickly opined, “Oh, I see it got you too.” Or, the errant golf ball that broke the windshield of a passing car in Missoula. He had a way about him of handling just about any situation with aplomb.

I could go on and on, recounting his affection for that big, cold Marguerita after a hard day in the sun, or being regaled with his stories on the road or the many antics of firefighters at work and at play. Ross lived life with gusto and left no regrets.