Exercise can slow the ageing process – a professor explains how


The tradition of sending a telegram to every British citizen on their 100th birthday was started just over 100 years ago by George V, who sent out just nine letters. Last year, the Queen had to sign over 16,000 birthday letters. The UK has an aging society, with falling birth rates and increasing life expectancy. Improvements in public health and medicine have helped to achieve this amazing effect on lifespan.

But for far too many, old age is endured and not enjoyed, being associated with disease and physical and mental frailty. Today’s baby boomers may be less likely than previous generations to accept that old age is a time for taking it easy, getting to know your GP and developing a taste for the settee, slippers and daytime TV.

My latest research project, conducted with colleagues at the University of Birmingham and Professor Stephen Harridge at King’s College London, aims to understand which aspects of human aging are inevitable, and which are a result of our modern lifestyles – and therefore under our control.
Staying strong

Prehistoric hunter-gatherer tribes were highly active, spending a lot of time and energy sourcing their food. If they weren’t successful, they would also spend days with or little or no food. By contrast, today we are a highly sedentary society; one study by the Heart Foundation revealed that most adults spend 15 hours a day sitting down. Together with eight hours of sleep, this leaves just one hour for physical activity.

An MRI scan of the thigh: as people age, muscle mass declines and turns to fat. Janet Lord/University of Birmingham., Author provided

As we get older, our physical activity levels decline even further. In our research, we have tried to determine how much this low level of physical activity contributes to the aging of many body systems, including muscle, bone and the immune system.

We examined 125 male and female cyclists, aged 55 to 79, who had maintained a high level of cycling throughout most of their adult lives. These were not Olympians, but very keen cyclists who were able to cycle 100km in under 6.5 hours for the men, and 60km in under 5.5 hours for the women.

We have previously looked at several body systems that we know decline with age, such as muscle and bone. At mid-life, people start losing muscle mass and strength at a rate of 1% to 2% per year, making it harder to carry out their normal activities such as climbing stairs. Our bones also become thinner with age and this can eventually lead to diseases such as osteoporosis.

We showed that the cyclists did not lose muscle mass or strength as they age, and their bones only became slightly thinner. We then went on to examine a body system that was not so obviously influenced by physical activity – the immune system.
Start ‘em young

The immune system declines with age, making older adults more susceptible to infections such as flu and pneumonia. They also respond less well to vaccines, so this preventive measure doesn’t offer the same protection which it can to younger people. When we compared the immune system of the cyclists to older adults who had not done regular exercise, and to young people in their twenties we found that their immune systems looked most like the young persons’.

In particular, we found that the cyclists still made lots of new immune T cells, produced by an organ called the thymus, which normally starts to shrink after we reach puberty. The older cyclists seemed to have a thymus that was making as many new T cells as the young people’s. The lifelong cycling seemed to have slowed down the aging of their immune systems. 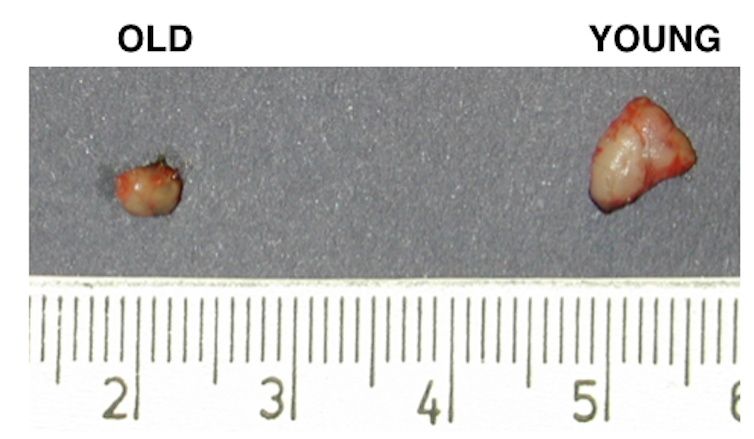 We investigated why this happened and found that the cyclists had high levels of a hormone called interleukin 7 in their blood, which helps to stop the thymus shrinking. Interleukin 7 is made by many cells in the body, including muscle cells, so we think that active muscles will make more of this hormone and keep the immune system, and especially the thymus, young.

So it is possible to take back control of your body and prevent its deterioration with age. The UK’s chief medical officer Sally Davies suggests that people do at least 150 minutes of aerobic exercise per week. We don’t know if this is enough to protect your immune system, but it’s a good place to start.

Our physical activity levels start to decline from the age of 25 in the UK, so don’t leave exercise until old age – start now.
Posted by Paul O. Davis, Ph.D. at 6:32 PM No comments: