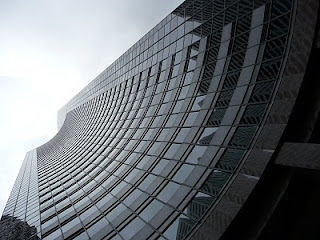 This past weekend, John Granby and I traveled to Seattle to be the gear inspectors for the 20th Annual Scott Stair Climb, a charity event that benefits the Leukemia and Lymphoma Society. The Columbia tower rises above Seattle to the tune of 74 stories. I believe that the fastest climbers, in full bunkers and on breathing air do it with one bottle in under 10 minutes. Pretty impressive. Most of the participants make a bottle change on the 40th floor. I took the challenge of joining the “sweepers” following up the last firefighter. My self-appointed job was to pick up beer bottles, knowing that likelihood would be non-existent, but sounded pretty official.

Checking 1500 sets of gear is a daunting task in of itself; I’ve got some ideas about how to avoid that number of squats to check boots for next year. I’m getting a stick on which to place my magic magnet!

The participants came in all sizes, colors and sex; from near and far- the Kiwi’s covering the longest distance. It’s always a pleasure to be around people who are into fitness. Their attitudes reflect the joie d’vive- the well-adjusted mindset of people who have a purpose in life. I couldn’t help but think of a few of the experiences that I had, back in the day when we had a working fire in a high rise building and the numbers of firefighters who were incapable of climbing the 20 stories to the top. Quite a contrast; making me think, “Why do we need to find out at the time of the fire that we can’t safely get the job done?”

In only 30 minutes, you get a pretty good perspective on where you are, relative to where you should be. It’s a self-diagnostic test that transcends numbers like your maximal oxygen uptake or blood lactate threshold. Come to think of it, it’d be a pretty good entrance test for the fire department. Some time back, I was asked to testify as an Expert Witness for the Los Angeles Fire Department in a case based upon fitness for duty. In my meeting with the fire chief, I asked him, “what is your expectation on the number of floors a LA firefighter should be able to climb at the scene of a fire?”

74 floors in 10 minutes is indeed impressive. Does that translate into a good Combat Challenge time?