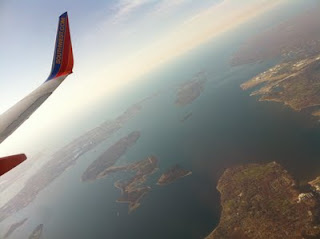 I hope this has been helpful. I’d like to hear of any deals, thoughts or suggestions you might have that can be shared with everyone. See you in Myrtle Beach this November.
Posted by Paul O. Davis, Ph.D. at 4:14 PM

I will be the first to admit that I was not a huge fan of Myrtle Beach. Actually, just about everyone I talked to wasn't a fan either. You mentioned you can fly out major cities for under 300dollars. I would consider Omaha a major city with a population close to a million. The cheapest flight out of Omaha was 471.00 directly into Myrtle Beach. We can fly into Charleston from Omaha for about 280.00 but you have to rent a car, pay for gas, and not to mention about a 2 and half hour drive each way. That is easily another 150.00 - 200.00. Unless you live fairly close to Myrtle Beach it is not that cheap to fly into. Vegas on the other hand, cheap to fly into, and you actually can fly into there from major cities.

The other disappointing thing about Myrtle beach is, there was absolutely nothing to do. The town is completely shut down for the season and the Ocean was about 40 degrees. Again, Vegas, comes with a built in entertainment. If you cant find something to do in Vegas you better check your pulse. I hate to be the guy who complains, but I am pretty sure I speak for a lot of competitors. Myrtle Beach is just not that competitor friendly!

I agree with John. Myrtle would be a great place in June or July, but in November? Pretty bland.

The fact is that the Challenge gets less and less media attention every year. This along with the economic state of the U.S. ultimately leads to less sponsorships for teams, and more out of pocket expenses for the competitors.

With more out of pocket money being spent, competitors want the convenience of flying into a location without the cost of a car (or more likely a 16 passenger van), along with activities for after the event is done for the day.

If travel costs continue to rise, paired with a sub-par location which attributes to the cost, which is closely followed by a nearly impossible Open Division Individual final day qualification; competitors in my opinion will simply just decide to turn their interests elsewhere.

A lot of competitors have stated that they do not like Vegas, mostly due to the fact that it is not very family friendly. That is fair enough, most people with families make it an annual trip. Vegas however, is a great location for the Challenge as it is right in the middle of an easily accessed city, and the entertainment capital of the world.

This year the travel costs do not end with World's though. National's location has been set in Fort Pierce, FL, which I am sure is a fine city. The caveat is that it is two hours from Orlando, or a little over an hour from West Palm Beach. Looks like more rental cars unless you live in the Southeast...