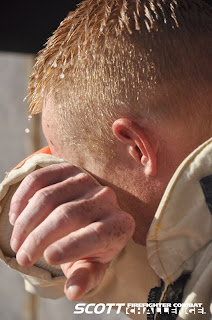 The number of heat records set this summer have shattered many that have stood for decades. It’s estimated that over 200M people were affected this year. All the while, the mighty Scott Firefighter Combat Challenge has bravely soldiered on. On a positive note, we’ve had one transport- an individual who admitted self medicating with Creatine.

I hear a lot of comments from spectators that it must be brutal wearing all that gear. And it is- if you had to wear it for periods longer than a few minutes. Fortunately, the time on the course does not add appreciably to the thermal load. The body has an amazing thermoregulatory system. Within a few minutes of maximum muscular contractions, core temperature can climb 1°C. We all know about the heat-injury-illness paradigm. Core temperatures of 104°F are consistent with heat stroke- except when it isn’t. Like in well conditioned athletes who can tolerate running a marathon with this range of core temperature without any consequences.

There is, however, a critical part of the equation: hydration. Your water on board has more to do with maintaining homeostasis than anything else. Even a well-conditioned athlete can’t make it without replacement. Another adaptation is retaining electrolytes. Well fit athletes lose less electrolytes than do unconditioned people.

Sports drinks such as Gatorade provide essential electrolytes as well as fuel. But these are poorly tolerated in the presence of arduous physical activity. I continually remind people that the thirst mechanism is about 20 minutes behind the power curve. In other words, but the time you’re thirsty, it’s too late. Sports drinks should be taken at least an hour before, and not again until the event is well over.

It’s rewarding to watch all the Challenge athletes walking around with their gallons of water. Proper hydration needs planning and you need to start the day before the event. Urine color is the best indices of your status. There is a risk of overdoing it and creating a condition of hyponatremia- where you’re losing electrolytes because you’re overwhelming your kidneys. While a rare phenomena, it can have grave consequences.

Staying out of the sun, ingesting about one pint per hour (to make up for insensitive fluid loss) is the preferred pre-race preparation. Training in the heat is the fastest way to become acclimatized to heat. But, the old adage: “everything in moderation” works every time. Oh yeah; and on the point of beer, it is not a good hydration source. You do not buy beer, you rent it. Alcohol will dehydrate you- before AND after the Challenge.
Posted by Paul O. Davis, Ph.D. at 4:51 PM