The Telltale is Back! 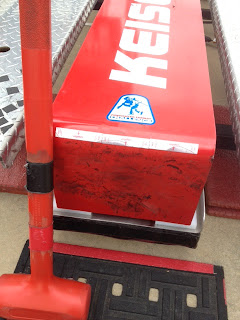 For nearly five years, we’ve been searching for a replacement to the Golfsmith pressure sensitive tape that we used as a telltale for illegal hits. Why? A little history.  At our very first Challenge back in 1991, we had one Keiser (the original prototype) and one Stanley shot mallet hammer.

It didn’t take that field of competitors long to figure out that if you hit the handle on the edge of the beam a millisecond before the hammer struck the face, you’d create a whip (torque) effect and get more distance for your strike. However, this is not using the tool as it was intended and destroyed the hammer. So, back to the drawing board. The golf tape solution provided an objective method of determining “fouls” or errant strikes that did damage to the hammers. Every miss-strike was clearly evident in the form of a permanent mark that the official could record.

So for years, we purchased and used a pressure-sensitive tape until Golfsmith no longer made the product. We experimented with some other solutions to no avail. While the vast majority of competitors quickly determined the best method to strike the beam was at a 90° angle, we continued to have a very small number of competitors who couldn’t seem to aim with precision, or seemed hell-bent to evoke damage on the equipment.

Eureka! After a google search, Daniel discovered that there is a new and improved solution by Golfsmith. So we purchased several boxes of the product and are re-introducing the enforcement of the rule for “hooking.” I’ve reproduced the rule on Forcible Entry below- so that everyone is familiar with the expectation. Note also the clarification on the loss of control of the hammer, another infrequent, but potentially dangerous mistake.

The Rule
The forcible entry evolution utilizes the Keiser Force Machine (a chopping simulator). Using a nine pound (4kg) shot mallet provided, and with both feet on the diamond plate surface, the competitor must drive the sled, a 160lb. (72.5kg) steel beam a horizontal distance of five feet (1.5m). Pushing, raking or hooking the beam is not allowed; only the head of the mallet is allowed to strike the beam. The handle must not come in contact with the beam at any time. The upper edge of the beam will be covered with pressure sensitive material, making infractions visible by a mark thereon. A five second penalty is assessed for each infraction after the first handle strike. Both hands must be above the tape mark on the handle (12 inches [30.5cm] from the top [head] end) at the point of impact. A two second penalty is assessed for every inch (2.5cm) or fraction thereof that the sled is short of the end of the tray. Any part of the hammer must be placed on the designated 2 foot by 3 foot (61cm x 91cm) mat. Contacting the mat is defined as the hammer being in contact with the imaginary plane that extends vertically from the border of the mat. A two second penalty is assessed for this infraction. Prior to completing the evolution, if the competitor loses control of the hammer, and it travels outside of the boundaries of the the confines of the tray, the competitor will be disqualified.
Posted by Paul O. Davis, Ph.D. at 5:42 PM