There have been some spectacular venues for the Challenge, but you would be have to reach far down the well of superlatives to find a better one than Bled, Slovenia. More than 100 Participants from across Europe descended on this town of 5,000 for three days of competition. You may recall that Bled is the venue for the World Cup rowing championships and the subject of an earlier BlogSpot. The Slovenian national single, doubles and fours were going on during our event.

I attended a concert provided by the National Police Band. It's hard to believe that these extraordinary musicians- professionals in their own right- are also cops (see  http://youtu.be/UwJBzS2VcRE). 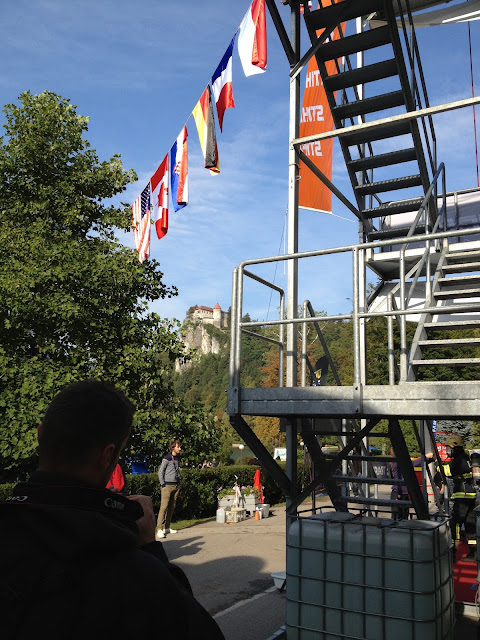 A couple of photos provide a perspective that you'll not witness anywhere else- note the castle, constructed in the 1200's overlooking the site.

The final race was fitting as the proverbial cherry on the sundae. Ramstein AFB faced the
Szczecin (Poland) team. The USAF got off to a good start, but were passed on the Keiser. By the time the US reached the dummy, the Poles had a 3-4m lead. The dummy dragger caught the poles at the finish line and had a margin of .25 seconds for the win.

You're going to get to see and meet a number of these great athletes in Myrtle Beach as well as other locations in the future.

If you had been there, you would not know that you were 5,000 miles from home. The Challenge is truly becoming a global sport as the excitement spreads across the universe of firefighters.

There were sponsor exhibits; my favorite was the Stihl woodcarver with his variety of chainsaws and power tools. http://youtu.be/h194XcKRUyA

Wow! France, Germany, Slovenia and... Who knew this would become a global event. I have met some firefighters from other countries via the World Police & Fire Games. I hope to meet some of these guys as well. It makes you realize we all do the same thing, maybe a little differently and with different equipment, but the same job nonetheless.