The Tale of the Tape 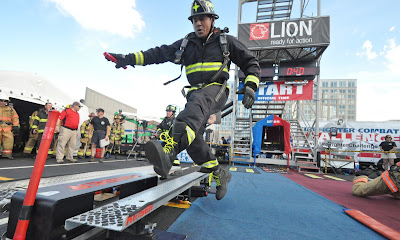 It’s a lot of fun to go analytic when it comes to sport. Baseball is probably the best example. Students of the game pour over the numbers- the value of which has never been better described than in the movie Money Ball.

In our own inimitable way, we’ve become more sophisticated in examining the underpinnings and constructs of how we can go faster. The operant word here is power. Sure, you need a modicum of strength, but it’s the application of strength, expressed per unit of time (watts) that explains performance on the Firefighter Combat Challenge course.

So, the question is, “Where are there opportunities to shave off seconds and fractions of seconds in order to go faster?” The 2-minute barrier, long a benchmark is now almost passé. Meaning no disrespect to anyone who goes sub-2, but like everything else in sport- faster, higher, stronger drives the equation.

We were curious to know how the data looked if we put it into an Excel spread sheet and then plotted the time line, dissecting the splits and comparing the World Records for three individuals and one Relay.

In the Daniel Pace created chart below, Bob Russell’s 2001 historic run on Mudd Island in Memphis is displayed longitudinally in a color bar graph, along with the segment times of the total run. Then, Ryan Fitzgerald’s and Justin Couperus’s races are similarly formatted for comparison and Montgomery Team Blue’s WR on the bottom.

You can draw your own conclusions, but look at the splits for a relay. Clearly, an individual is fighting a downstream fatigue effect. Having an ability to maintain terminal velocity for the dummy drag is hugely important. The big blocks of time are those activities were the greatest improvements are possible; e.g.: the run to the far end of the course and the hose advance.

From 2001 to the present, the time on the Keiser represents the smallest segment of the five events. Clearly, there’s been a lot of discussion about the Forcible Entry simulation. But, it’s far disproportionate compared to where real time savings exist.

The level of conditioning of today’s Challenge Athletes is way beyond that of those in the past- even ten years ago. The Scott Firefighter Combat Challenge is still one of the toughest competitons out there.  But, to your credit, a lot of you guys make it look easy.  “It ain’t no joke.”

Wow what a great blog, i really enjoyed reading this, good luck in your work. Firefighter Requirements