Since making the trip to Kamloops by way of Vancouver, I’ve been to Seattle and Yuma. But, more about those trips later. I only mention that to explain the delay in getting back to my office and organizing my activities to include the rest of the story of the Mighty Kamloops team. Part of the celebration was the recognition of Team New Gold at the WHL Kamloops Blazers game on Wednesday night. This was preceded by the City Council meeting on Tuesday where one of the council members asked about hosting a World Challenge in the future. 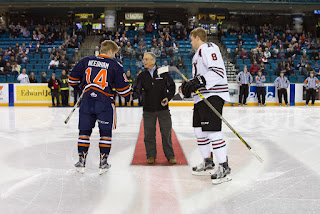 I was honored to do the ceremonial “Puck Drop” prior to the game. For those of you unfamiliar with hockey, it’s the analog to throwing out the first pitch at a baseball game.  I knew that the players wouldn’t be fighting for possession, but I couldn’t figure out why they would not provide me with some separation between the blades. So, I just dropped it in the available open space. The home team player picks it up and gives it to you. Very cool, actually very cold. The puck is frozen, and once thawed, now graces my office. 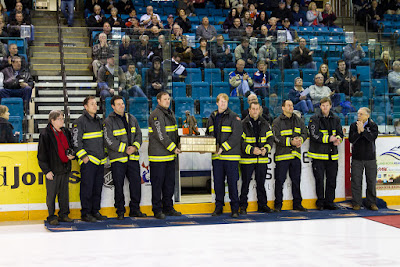 Scott was represented by Chuck Pecor, from Guillevin, the Scott distributor for British Columbia. He and I are easily distinguishable from the KFD team as we’re not wearing our Lion turnouts. We were afforded carpets to walk on, thereby avoiding an embarrassing situation at a Cap’s game in D.C. where we did a Victim Rescue simulation on the ice with a not-too-good outcome.

We also prepared a 90 sec video for display on the Jumbotron as well as at the City Council meeting the day before. You can view that here.