LION president Stephen Schwartz said the elevated cancer risk "derives from the hazardous substances produced by the fire, not the turnout gear that protects firefighters"

By FireRescue1 Staff
DAYTON, Ohio — In a letter to the editor, the president of an Ohio-based PPE manufacturer is refuting claims that firefighter turnout gear may be hazardous for those donning it for protection.
LION president Stephen Schwartz sent the letter to the editor of the Columbus Dispatch, which published an article entitled "Firefighters' gear may be hazardous" on Oct. 29 based on a claim by Cincinnati lawyer Robert A. Bilott.
In the letter, Schwartz said the article "appears to be based solely on one class action attorney's false statement that firefighter gear is treated or made with chemicals known as perfluorooctanoic acid (PFOA) or perfluorooctanesulfanic acid (PFOS), and suggestion that firefighter cancers may be attributable to their turnout gear."
Schwartz said LION turnout gear is not treated or made with such chemicals.
"PFOAs and PFOSs have never been components of Lion's turnout gear, either as a coating or as a textile," he writes.
He added that Bilott’s confusion may stem from the industry's past use of PFOA as a "processing aid in the complex process used to manufacture PTFE moisture barrier films and durable water repellent finishes used in many types of water repellent clothing."
PFOA manufacture and use has declined due to an EPA initiative, according to the International Association of Fire Fighters Division of Occupational Health Safety and Medicine. In 2006, the EPA and eight major U.S. companies that manufacture PFOA launched a program to reduce emissions of PFOA by 95 percent in 2010 and to have it phased out in production by 2015.
The IAFF said it may be possible for firefighters to encounter PFOA in fire suppression activities, but "the data to address this are limited and as PFOA is increasingly less common, this is a decreasing concern."
In 2012, the German Federal Institute for Risk Assessment reviewed several studies and found that even if a person has "direct skin contact with such finishes over the entire skin surface for 12 hours each day, 365 days a year," the maximum exposure is "far lower than the values which are assumed as threshold values for toxicological effects."
Schwartz added that their gear is tested to meet the NFPA 1971 standard, and that it's "irresponsible to publish false statements implying that turnout gear is unsafe because it is allegedly made with PFOA or PFOS." He said that he was "concerned and saddened" by the article and that the elevated cancer risk "derives from the hazardous substances produced by the fire, not the turnout gear that protects firefighters."
The IAFF said they do not recommend that legacy turnout gear be replaced outside of its lifecycle.
"Firefighters wishing to minimize PFOA exposure should continue to wear their PPE, including SCBA, and regularly decontaminate their turnout gear," IAFF officials said.
You can read Schwartz's full letter below. 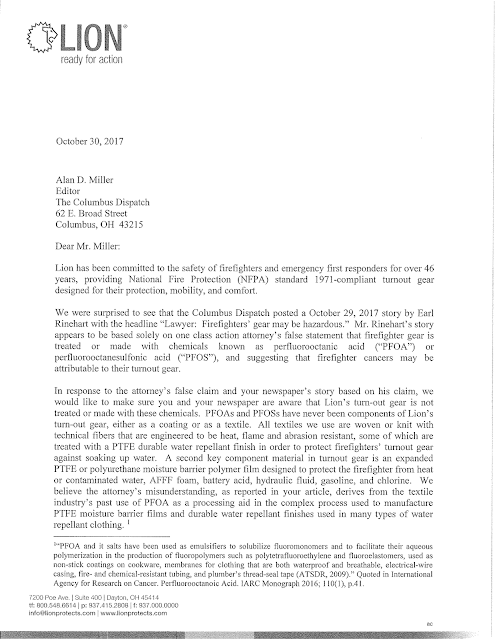 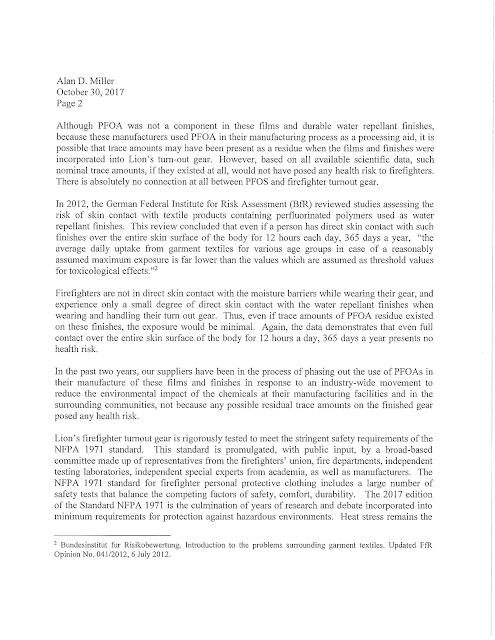 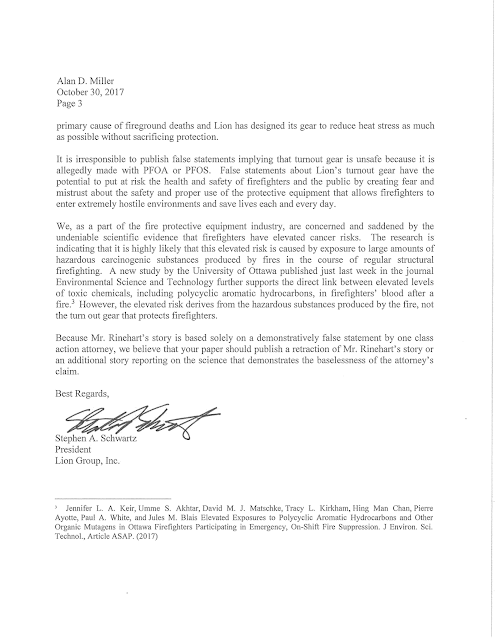