We aggregated data from 2007 forward (≈20K firefighters) to build this dataset, and looked at average and top performers time (in seconds) on the Scott Firefighter Combat Challenge (five linked fire ground activities). [We have over 40,000 records going back to our inception in 1991]

The Firefighter Combat Challenge has been touted as the "Toughest Two Minutes in Sports" by ESPN, our broadcast partners. At the World Championships in Louisville this past October 2017, a sample of male firefighters participated in a blood lactate study, that confirmed the intense, anaerobic nature of this all-out sport. This study will be a doctoral dissertation and published in the not too distant future.

The results are not surprising, but nevertheless, striking.

The validity of the five fire suppression tasks has been repeatedly linked to actual on-the-job behavioral requirements through formal job task analyses. All competitors were wearing SCBA and their PPE (personal protective ensemble- a version of MOPP gear) with a total weight of ≈40 pounds. The climb of a five-story tower, with a 42lb (19Kg) shoulder load, that can be accomplished in as little as 12 seconds by the elite participant, is a calculated energy production is 1.5 HP. The final task, lifting and dragging backward a ≈80Kg (175lb) anatomically correct mannequin a distance of 106 feet is frequently accomplished in as little as 12 seconds.

Keep in mind, that virtually every firefighter could (or should) be capable of performing the Combat Test in about six minutes (the official cut-off time for the Scott Combat Challenge). What makes this a real Challenge is to see what insane time, under six minutes, you do.

Each of the gender groups is large samples. These are self-selected participants, and to that end, are probably not representative of the North American fire service.(I.e., they are more likely to be in the 85th percentile and above.) There are some repeated measures in this cohort. But, with 942 female data points, and 18,021 males, it's a reasonable way to examine trends over a career. Female firefighters are a very small cohort of this universe (≈3.5%) and 5% of the firefighter population.

Some observations from these data: The top-performing women are consistently above the male average at any age. Their small numbers show a trend line that is more variable (as would be expected). The males continue to show amazing performance time at ages when most firefighters have retired (i.e, in their 50's and 60's). Of course, that fact that they're still competing is in and of itself, remarkable.

From a leadership perspective, this speaks loudly as to viability and sustainability of public safety employees, particularly firefighters, who see the value of a personal fitness program as a protection against the ravages of a physically demanding and dangerous occupation. (The one, radially up-sloping datapoint at the extreme right side is the retired 69-year-old Fire Chief of Carlsbad NM. (We do not recommend 70-year-olds to try this competition!)

If you're talking about leading from the front, there's no better platform by which to demonstrate that you can be fit across the entire spectrum of public safety employment - but it will not happen by accident. 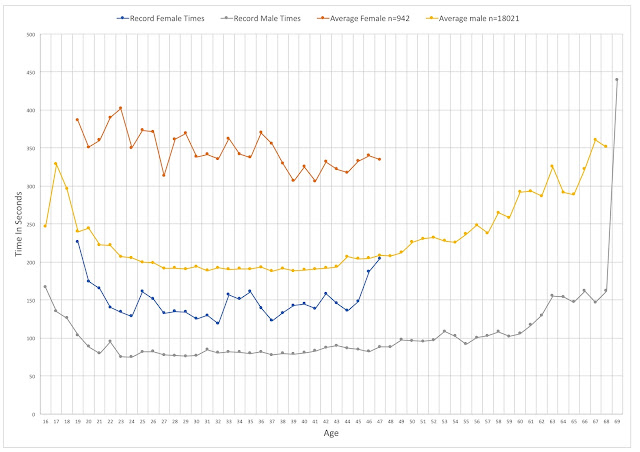