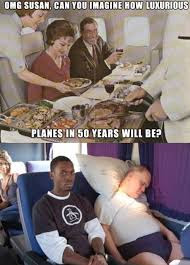 I saw a humorous meme a short while ago. It’s posted here. Basically, it goes something like this: a couple is being served dinner on a flight. They’re so impressed and wonder how luxurious planes in 50 years will be.

This past week, with little pre-planning, I needed to get to Berlin for the 12th Annual Firefighter Combat Challenge, and my options were limited. A never heard of airline, called WOW Air came up on Kayak.

It had the shortest elapsed time to Berlin via Iceland. All the cheap seats were gone, and I hate to pay retail. But, I needed a booking. The International departures are on D concourse, the far end of the airport, where I have not yet traveled. The departure was scheduled for 7PM (1900hrs EDT). The day before, I wanted to check in and the website reported that there was no such reservation. That really bolstered my confidence. I called the airline and after a significant hold time, the agent confirmed my reservation under my last name: DAVISIII. I am the 3rd. But this was a new one. The recommendation was to be at the gate 3 (three) hours before departure. Given the lapse of the confirmation on the website, I thought that I better be present since I could not miss this window.

I arrived at the appropriate three-hours before departure, checked the one bag to avoid the $60 fee and had my carryon inspected to ensure that it would fit under the seat.

In photo two below, you can see about 200 passengers milling about, past 7, with no plane in sight.