How Long Does the Coronavirus Last on Surfaces?

Researchers looked at how long the virus can survive on cardboard, plastic, and stainless steel, as well as after being aerosolized and suspended in midair.
Gregory Barber03.14.2020 07:00 AM 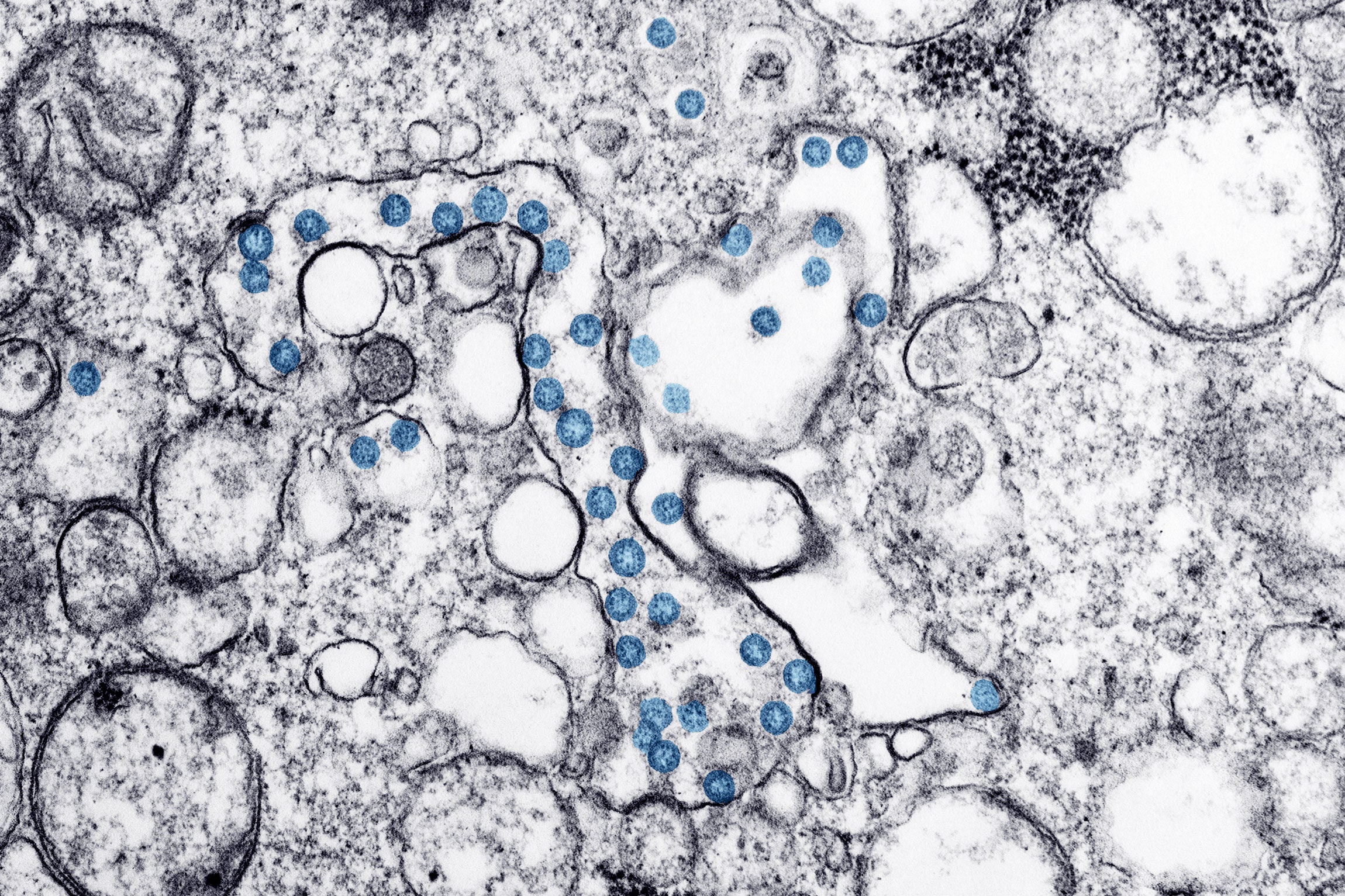 A transmission-electron microscope image of an isolate from the first US case of Covid-19.Photograph: Hannah A Bullock; Azaibi Tamin/CDC


By now, let’s hope you’re safely ensconced at home—going a little stir-crazy, perhaps, but doing your part to “flatten the curve.” But let’s say you’re one of those people who can’t stay in. Maybe you deliver Amazon boxes all day long, or you still need to drive a city bus. Or maybe you’re treating sick people in a hospital while trying not to get sick yourself. Or, for that matter, maybe you just have to go to the grocery store. In that case, you might want to know: How long does SARS-CoV-2, the virus that causes Covid-19, last on surfaces we touch every day?

Potentially several hours, or even days, according to a preprint published this week by researchers at the National Institutes of Health, Princeton, and the University of California, Los Angeles. The researchers exposed various materials to the virus in the lab. They found that it remained virulent on surfaces for a lengthy period: from up to 24 hours on cardboard to up to two or three days on plastic and stainless steel. It also remained viable in aerosols—attached to particles that stay aloft in the air—for up to three hours. That’s all basically in line with the stability of SARS, the coronavirus that caused an outbreak in the early 2000s, the researchers note.

The researchers caution that work done in the lab may not directly reflect how long the virus can hang around on surfaces out in the world. But it’s a critical part of understanding the virus—and how to forestall the disease’s spread—all the same. That’s because transmission dynamics are difficult to study in the midst of an epidemic. In hospitals and other public spaces, people are doing their best to disinfect, making it difficult to study how microbes behave in the wild.

And similarly, while the researchers tested how long the virus can survive in aerosols suspended in the air, they didn’t actually sample the air around infected people. Instead, they put the virus into a nebulizer and puffed it into a rotating drum to keep it airborne. Then they tested how long the virus could survive in the air inside the drum. The fact that it could live under these conditions for three hours doesn’t mean it’s “gone airborne”—that it hangs around so long in the air that a person can get it just from sharing airspace with an infected person. “This is not evidence of aerosol transmission,” Neeltje van Doremalen, a researcher at the NIH and a coauthor of the study, cautioned on Twitter.

There’s also a difference between a finer “aerosol,” which can hang suspended in the air for a while, and a larger “droplet,” which is more likely to fall down. When an infected person coughs or sneezes, they typically spread the virus via fluid droplets. While the results suggest the virus remains infectious in the air, there’s little evidence so far that infected people are producing aerosols in significant amounts, rather than droplets.

Still, Joseph Allen, a professor of public health at Harvard who wasn’t involved in the study, says the data supports the idea that people should take practical precautions to prevent airborne spread—doing things like ensuring the flow of fresh air and good ventilation. He points out that methods of transmission should be thought of as a spectrum, and that the difference between droplets and aerosols isn’t so stark. “We shouldn’t be waiting to figure out the exact split between transmission modes before we act—we should be taking an ‘all-in’ approach,” he wrote in an email to WIRED.


It’s also still difficult to say how much “fomite” transmission is actually happening—that’s the term for when a bug is left on an object, which is then picked up by others. But this is more evidence to continue playing it safe. While CDC officials have said contaminated surfaces are a less important vector than droplets in person-to-person spread, the agency still advises people to heartily disinfect. The researchers also point out that, in the case of SARS, both fomite and aerosol transmission are thought to have played a role both among super-spreaders—infected people who manage to spread the virus to lots of other people—and in hospital-acquired infections.

Dylan Morris, a researcher at Princeton who co-authored the study, notes that the quick spread of the virus—which is moving faster than those that cause SARS and MERS—means there are additional dynamics at play. A number of studies have suggested significant shedding of the virus early on in the infection, while people are more likely to be going about their normal lives and before they’ve developed the severe symptoms that warn them to stay home.

The researchers now plan to look at how environmental conditions, like temperature and humidity, affect the virus’s ability to stick around. In addition to better understanding of real-world transmission, they also want to know if the spread may slow during warm summers, as it does for the flu.


Read all of our coronavirus coverage here.

Others are also trying to tackle those questions. This week, in another preprint, researchers based in Wuhan published data on aerosols gathered from hospitals and areas around the region. For the most part, the air was clear; places like the hospital intensive care unit they tested were essentially virus-free. But in some areas, they found higher concentrations: in a staff area for example, for example, where doctors and nurses were frequently removing protective gear, and in a mobile toilet for patients. They point to findings in Singapore from a group of researchers at the National Centre for Infectious Diseases, in which a small study involving Covid-19 patients in a hospital there found significant viral shedding in patients’ fecal samples. While that study didn’t find an airborne virus, the Wuhan researchers argue it’s plausible that in the Chinese hospital, toilet flushes could have sent particles into the air.

The research is still early. But taken together, the studies suggest health care providers should take precautions as they ramp up to care for increasing numbers of Covid-19 patients, Morris says. “There's currently no evidence that the general public needs to worry about aerosol transmission of SARS-CoV-2, but there plausibly could exist risks in specialized hospital settings,” he writes in an email.

Others, like Allen, see more reason for caution. “The guidance for hospitals already includes bringing in more fresh air and enhancing filtration,” he writes. “It strikes me as inconsistent that the public is not getting a similar message.” In any case, he points out the core advice for staying healthy remains the same: Get yourself out of crowds. Stay home if you can. And please, please, wash your hands.

More From WIRED on Covid-19
What's social distancing? (And other Covid-19 FAQs, answered)
Don’t go down a coronavirus anxiety spiral
How to make your own hand sanitizer
Singapore was ready for Covid-19—other countries, take note
Is it ethical to order delivery during a pandemic?
Read all of our coronavirus coverage here
Posted by Paul O. Davis, Ph.D. at 8:01 PM