What’s in wildfire smoke? A toxicologist explains the health risks and which masks can help

Smoke is now turning the sky hazy across a large swath of the country as dozens of large fires burn, and a lot of people are wondering what’s in the air they’re breathing.

As an environmental toxicologist, I study the effects of wildfire smoke and how they differ from other sources of air pollution. We know that breathing wildfire smoke can be harmful. Less clear is what the worsening wildfire landscape will mean for public health in the future, but research is raising red flags.

In parts of the West, wildfire smoke now makes up nearly half the air pollution measured annually. A new study by the California Air Resources Board found another threat: high levels of lead and other metals turned up in smoke from the 2018 Camp Fire, which destroyed the town of Paradise. The findings suggest smoke from fires that reach communities could be even more dangerous than originally thought because of the building materials that burn.
. 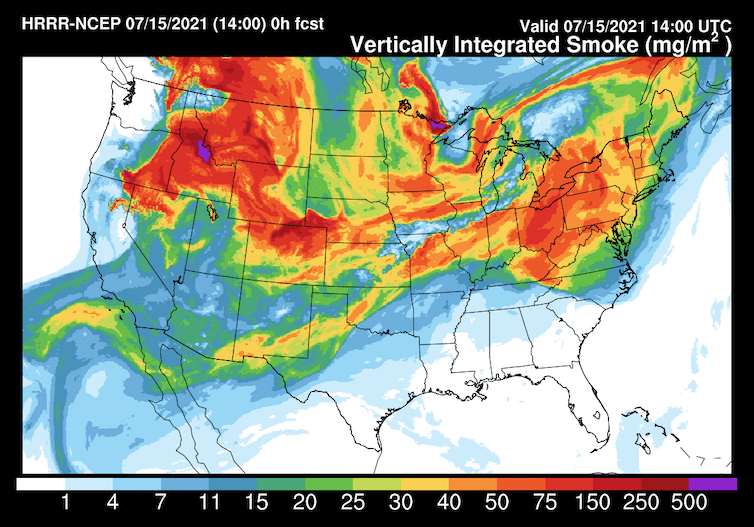 NOAA’s smoke forecast is based on where fires were burning on July 15, 2021. NOAA

Here’s a closer look at what makes up wildfire smoke and what you can do to protect yourself and your family.
What’s in wildfire smoke?

What exactly is in a wildfire’s smoke depends on a few key things: what’s burning – grass, brush or trees; the temperature – is it flaming or just smoldering; and the distance between the person breathing the smoke and the fire producing it.

The distance affects the ability of smoke to “age,” meaning to be acted upon by the Sun and other chemicals in the air as it travels. Aging can make it more toxic. Importantly, large particles like what most people think of as ash do not typically travel that far from the fire, but small particles, or aerosols, can travel across continents.

Smoke from wildfires contains thousands of individual compounds, including carbon monoxide, volatile organic compounds, carbon dioxide, hydrocarbons and nitrogen oxides. The most prevalent pollutant by mass is particulate matter less than 2.5 micrometers in diameter, roughly 50 times smaller than a grain of sand. Its prevalence is one reason health authorities issue air quality warnings using PM 2.5 as the metric.

The new study on smoke from the 2018 Camp Fire found dangerous levels of lead in smoke blowing downwind as the fire burned through Paradise, California. The metals, which have been linked to health harms including high blood pressure and developmental effects in children with long-term exposure, traveled more than 150 miles on the wind, with concentrations 50 times above average in some areas.
What does that smoke do to human bodies?

There is another reason PM2.5 is used to make health recommendations: It defines the cutoff for particles that can travel deep into the lungs and cause the most damage.

The human body is equipped with natural defense mechanisms against particles bigger than PM2.5. As I tell my students, if you have ever coughed up phlegm or blown your nose after being around a campfire and discovered black or brown mucus in the tissue, you have witnessed these mechanisms firsthand.

The really small particles bypass these defenses and disturb the air sacs where oxygen crosses over into the blood. Fortunately, we have specialized immune cells present called macrophages. It’s their job to seek out foreign material and remove or destroy it. However, studies have shown that repeated exposure to elevated levels of wood smoke can suppress macrophages, leading to increases in lung inflammation.

Dose, frequency and duration are important when it comes to smoke exposure. Short-term exposure can irritate the eyes and throat. Long-term exposure to wildfire smoke over days or weeks, or breathing in heavy smoke, can raise the risk of lung damage and may also contribute to cardiovascular problems. Considering that it is the macrophage’s job to remove foreign material – including smoke particles and pathogens – it is reasonable to make a connection between smoke exposure and the risk of viral infection.

Recent evidence suggests that long-term exposure to PM2.5 may make the coronavirus more deadly. A nationwide study found that even a small increase in PM2.5 from one U.S. county to the next was associated with a large increase in the death rate from COVID-19.
What can you do to stay healthy?


Here’s the advice I would give
e just about anyone downwind from a wildfire.

If possible, avoid being outside or doing strenuous activity, like running or cycling, when there is an air quality warning for your area. 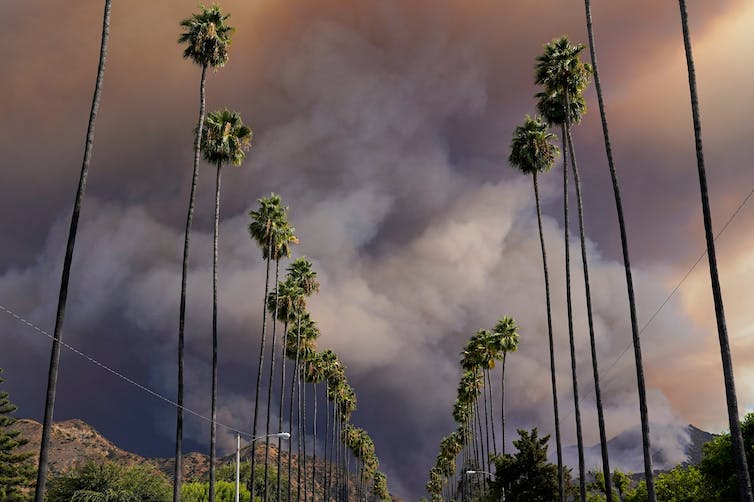 Be aware that not all face masks protect against smoke particles. Most cloth masks will not capture small wood smoke particles. That requires an N95 mask that fits and is worn properly. Without a proper fit, N95s do not work as well.

Establish a clean space. Some communities in western states have offered “clean spaces” programs that help people take refuge in buildings with clean air and air conditioning. However, during the pandemic, being in an enclosed space with others can create other health risks. At home, a person can create clean and cool spaces using a window air conditioner and a portable air purifier.

The Environmental Protection Agency also advises people to avoid anything that contributes to indoor air pollutants. That includes vacuuming that can stir up pollutants, as well as burning candles, firing up gas stoves and smoking.