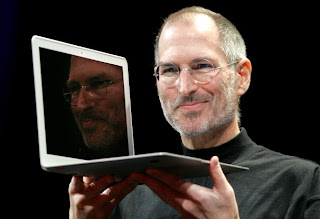 In 1984, I was running a company called Institute of Human Performance. We provided occupational health services to a variety of local and federal government emergency service organizations. The backbone of our business was a mainframe computer manufactured by Data General (DG). It was the size of two side-by-side refrigerators and required its own climate-controlled room. My 250MB Fujitsu Eagle drive for my DG cost over $10,000 and was so heavy that a small forklift was required to move it. One the features we provided our police and firefighters were computer generated customized health and fitness reports and individualized exercise prescriptions.

A friend of mine with a master’s degree in computer science from the University of Maryland introduced me to the Macintosh computer. I had dismissed his entreaties to test-drive his for months. Finally succumbing, I told my wife that I’d be heading over to Phil’s house and would be back in an hour.

I was of the opinion that this could not be a real computer because there were not shelves of manuals required to document everything. Five hours later, I was still exploring and amazed at a computer that had no manuals and a mouse. That Sunday changed my life and the pathway of my company. I went to Sears the next day and purchased a Mac. They were over $2,500, with a whopping 1MB of Ram and no hard drive. From that point, we never looked back. We dumped the Data General and assembled a number of connected Macs.

One of the immediate uses was a contract with the US Navy. I wrote their fitness manual and produced 18 Command Fitness Coordinator certification programs, hauling my 22-pound Mac cube with me around the world. All of this was done with floppy disks!

The ability to create graphics, typeset technical reports, edit video was all within our grasp, and best of all, in-house. It has had a profound impact on every nuance of what we have done over the past 27 years. Steve Jobs’ death at 56 is a tragedy. His contributions to society are staggering. The productivity that we as a company have gained is enormous.

Steve went out on top; he created the world’s most valuable company and has been vindicated and richly rewarded. But the sad, sad part of this whole story is that there is no amount of money that he would not have spent to have his health back.

Isn’t amazing how people can easily disregard or fail to appreciate the very precious gift of life. Like the words of the song, “…you don’t know what you’ve got till it’s gone.” Life can be cruel. I have no idea as to what Steve’s health and fitness habits were. And maybe, he was one of those statistical flukes, where he did everything right and still got run over by the cancer bus.

But, there are a lot of things that we do know about that contribute to health and the avoidance of non-communicable diseases (NCDs). Taking responsibility for our behavior is what makes us good animals. Right now, a disproportionate number of our population are on a collision course with diabetes. There will not be enough money to take care of the huge epidemic that is approaching. And this condition is avoidable and remediable by simply moving more.

I sometimes wonder if some people are just plain predestined to end up as casualties? Warnings screaming from cigarette packages in 24pt type: Smoking Kills! “This is a free country!” they respond. Were it only so; someone’s going to pay. I just don’t want it to be me.
Posted by Paul O. Davis, Ph.D. at 1:55 PM