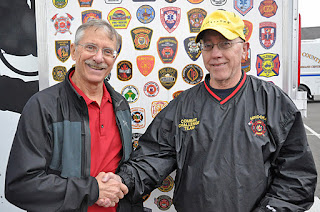 If you haven’t met Ted Overcash by now, you’ve missed out on one of the great benefits of the Scott Firefighter Combat Challenge. Ted is now 66. He’s been a fixture for years, although he’s slowed down a bit, he’s still alive and kicking.

Ted hasn’t set any records recently, although he and I held the over 60 Tandem record for about a year. But Ted would come out and run the course, time after time and year after year. His times would slowly work their way down as he trained and trained.

Ted is not a very big guy. He stands about 5’5”, weighting around 160. But Ted has the biggest heart of anyone I’ve seen. From the beginning in 199#, he struggled mightily, to the point that he scared me. But he would never give up.

Some years back, Ted was diagnosed with cancer. In his characteristic style, he battled back and became a cancer survivor.
He found out that he had a tumor in 2002, weeks after receiving the first GNC award in Deerfield Beach.
In May 2003 he ran his first Challenge 11 weeks after surgery.

In the Scott Firefighter Combat Challenge, we have a number of World Champion awards that are sponsored by Lion and named after our fallen comrades. We decided that while this was a proper way to honor their memory, why not name an award after one of our competitorsbefore they died? How much more fitting?

And so, the Overcash Award for the person who accrues the most points was created. Ted has been present to make the award for a number of years. Recently in Tinley Park, he asked me if we were still going to give out the award and would it be named after him?

“Of course,” I responded. “We wouldn’t have it any other way.“

Ted seemed pleased. So, if you’re in Myrtle Beach and see Ted, stop for a moment and let him tell you a little bit about his life’s journey. It’s always a great perspective to get the inside scoop on what it’s like to be a cancer survivor; just ask Ted.
Posted by Paul O. Davis, Ph.D. at 6:20 PM