Let’s Hear It for the Old Guys 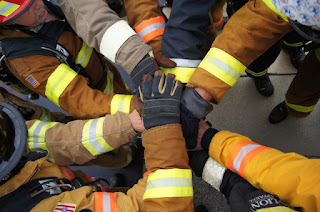 This past weekend in Fort Piece was a homecoming for a lot of Challenge veterans. In one of the over 50 relay races, these competitors boasted over 500 years of collective life experience. I had some quality time talking to Walter White who’s been with the Challenge since its inception. He’s seen his original department, American River morph into Sac Metro. Walter is now a Battalion Chief and is running solo. At one time, American River was a national threat. It seems as though the younger generation doesn’t have the same mental toughness as the old guys. We’ll talk more about this and expand on Walter’s particular insights on the Challenge and the fire service in an upcoming blog. (BTW, Challenge veterans, have you ordered your patch yet- it’s on this link: http://firefighterchallenge.com/VeteranProgram/home.php)

But, in the meantime, what was very interesting were the comments of the course volunteers. Indian River State College provided some of the best support we’ve seen so far this season. Comprised of instructors, staff and students the red shirts made the event run like clockwork. It was as though they had been training for this event for some time. A recurring topic of discussion was the respect and admiration for our over 50 crowd. This indelible image of real, tough guys who were posting impressive times was not lost on the spectators.

Our announcer, Mike Word would point out many of the accomplishments of these grizzled veterans, never failing to mention their ages. For recruits, what better example could be made of firefighters in the twilight of their careers still able to run the course in blistering times. This does not happen by accident.

For the better part of 9 years, I wrote a column for Fire Chief magazine. In one such article, I facetiously remarked that we should eliminate PT (physical training) from the recruit curriculum. Actually, I was half serious. After all, why should it be management’s responsibility to rehabilitate you to get the job that you should have been prepared to do the day you walked in the door.

If you had not been maintaining your fitness on your own time, what makes us think that you’re suddenly going to have a change of heart and start working out once you’re actually hired to do one of the toughest jobs in America today? A recent anecdote makes my point. Larry Hinds had suggested that climbing an aerial should be a routine drill for everyone. After all, this is an essential function of being a firefighter. The chief pushed back, knowing full well that a significant number of incumbents were physically incapable of performing the task. He’s still looking at it.

Hard to believe that we can take seriously the mantra, “everyone goes home” when in fact, a lot of these people should stay home. And it’s even worse that we know we have the problem and won’t do anything constructive to address the huge, looming problem of a workforce that is unsafe at any speed.
Posted by Paul O. Davis, Ph.D. at 2:24 AM

Paul
I was an old guy once--what does that make me now--an ancient guy? I really enjoy your blogs. Glad to see the crowds enjoy watching "real tough guys posting impressive times". I'm still staying healthy and in shape, but I do give great credit to those guys over 50 and 60 that continue to compete. How a 70+ category?
Roy

2 things. first it was great to hear from roy and that he is doing well. second you and i have discussed the "old guys" a lot and i would like to thank you for the recognition that is starting to come their way. they are the core of the fire service and the heart of the ffcc. also, maybe if roy does come back i can be the guy who knew Moses and he could be the guy who hung out with Moses's dad.