We’ll Be Right Back After This Message 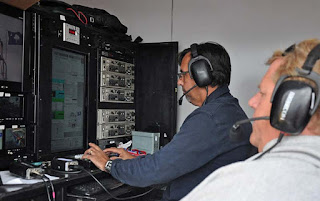 For the first time in our 20 year history, we broadcasted the entire World Challenge XX competition via Livestream. Well, that’s not quite accurate. For the past two years we ran a stationary camera and a chat line.

Thanks to the contributions of Lion, this year we invested a lot of resources to bring you a live show that was worthy of Primetime. With two fixed cameras, two tethered shooters and a jib, all directed by 8-time Emmy winner Rick Lewis, the show had the look and feel of an ESPN production. Matter of fact this is very similar to the show that we produced for one of our ESPN telecasts using a production truck.

Right now, you can go to http://www.livestream.com/firefightercombatchallenge to view archival footage. All of the broadcast has been backed up on a 2TB hard drive and we’ll begin the process of editing the segments into clips for uploading on YouTube as well as some special features such as “Bloopers of the Challenge” and a highlight reel.

This is tedious work and will take some time, but hey- we’ve got five plus months before the season starts anew.

The really good news is the numbers of subscribers. We had viewers from around the world. The compliments that we’ve received warm the cockles of my heart and inspire us to add even more content and features next year. The Air Force Academy, Elgin and Warren produced vignettes on their teams and we encourage more of these kinds of features for next year’s show.

Maria Prekeges who is a familiar face on a number of ESPN shows conducted nearly 50 interviews. We’re going to make some changes to the placement of our loud speakers so that you’ll be able to hear her better. We’d like to hear from you- about anything you liked, didn’t like or wanted to see. This is the time that we start planning for next season.

I can guarantee you that there will be commercials; that’s how free TV works. This grand experiment had some significant costs; but now that we’ve proved the worth, as they say, “well be right back after this message.”
Posted by Paul O. Davis, Ph.D. at 12:44 PM