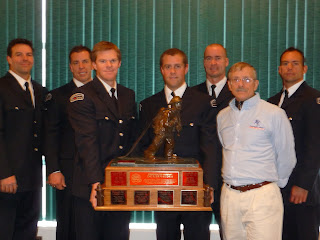 Not everyone has heard of Kamloops. And I would have attached no special significance to the place had my wife and I not driven through it on the way back from Alaska four years ago.

I even got a sort of strange going over from the Immigration Officer at the Vancouver Airport when he asked me my destination last Tuesday; “Kamloops” I replied. After a considerable pause, he remarked, “...Why?” (This is not to say that I was oblivious to the concept of a team from there, but had not yet met the individuals that comprised that team.)

Actually, they’ve got a great ski resort just a half hour outside of town: Sun Peaks. Shawn Davidson and I spent Wednesday on the slopes and we took video with my iPhone. Shawn was a ski patroller there during his idle youth and hasn’t lost much of his fearless skills. You can check us out on YouTube.com/ffcctv ((http://youtu.be/fXRAR8e6TQ4)). He’s the very fast guy.

Thursday, there was a very special presentation of the Scott Firefighter Combat Challenge World Championship Trophy in the Kamloops Convention Center (a place with an arena large enough to hold an event).

All the city government department heads and key personnel were present to observe the presentation of the trophy. I made some very complimentary remarks about the dedication and hard work that it takes to come out on top. We had a great buffet lunch following, and I also did a stand-up interview for their local TV station. The piece aired twice and I believe that we’ll be getting a copy.

Later in the afternoon, I visited the number one station and looked at their training course- the hose tower and front apron. The guys in the hall were very complimentary of the TV and were planning to get an AppleTV for next year’s broadcast.

Later that night the team took me out for a great dinner at Earl’s and I spent time talking mostly to Graham Mackenzie. He had completed the survey and provided me with some comments on subjects that I was not aware of. That’s one of the great things about feedback. We can’t think of everything and the competitors have a perspective that is different from our own.

So Kudos to Graham Mackenzie, Don Clarke, Mike Brown, Scott Leslie, Shawn Davidson and Mark Brise for a job well done. This has been a journey of significant perseverance.

So, over the next week or so, I’m going to provide my responses to your feedback. This is the relentless pursuit of perfection, or at least perfection that we can afford!
Posted by Paul O. Davis, Ph.D. at 2:47 PM