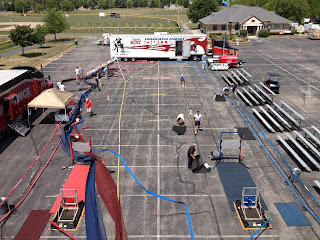 Are we snake bit or what? I described our deluge in Montgomery; that cost us a mixer and the Sennheiser wireless microphone- and a tent. In Sandusky, we had micro switches and relays in the Keiser and the timing system that had to be replaced. So, when we pulled into Fishers, we checked the weather and were pleased to see that there was no storm activity pending- at least until later Saturday afternoon.

But disaster came from an unexpected quarter: a medivac helicopter that was to be on display at the venue- came in on a low pass just above the tree line and literally blew the course away. The accompanying photo graphically demonstrates the scope of the damage. The finish line, fabricated from schedule 40 aluminum tubing was broken in two places. The clocks crashed to the ground, ripping the connecting cables from their sockets. The main control cable was likewise ripped. 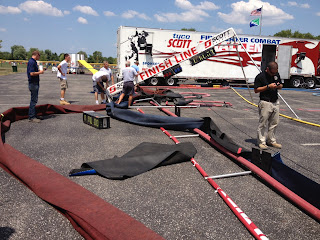 The thresholds were flipped and their connects trashed. Chief Steve Orusa suggested  that we postponed the day’s races. But Chuck DeGrandpre, in his characteristic, can-do manner set our crack road crew in motion to begin the repair process. Clint Lamb, Roger Shuttlesworth and Bill Alexander each took on a project.  In a few short hours, we had the timing system functioning, the finish line was welded with the assistance of the Town of Fishers Public Works Department welder. 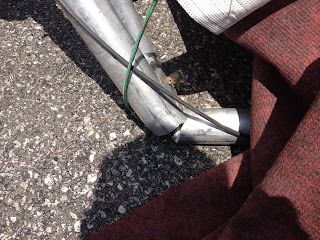 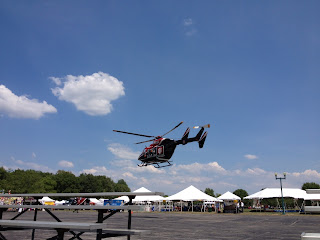 I can’t say enough about the ability of our Road Crew to rebound after what seems to be an unceasing string of adversities. Now, with all this bad luck behind us, let’s hope for clear sailing for the balance of the season.
Posted by Paul O. Davis, Ph.D. at 5:43 PM