To date we have not had a formal set of criteria for the Rookie of the Year. Subsequently, the Awards Committee has established that the term “Rookie” applies to an individual who runs the full Challenge course for the first time in that year- as opposed to participating as a tandem or relay team member in that year or any prior year.

The award is not based solely on the fastest time, but includes other factors including numbers of runs, percent of improvement, sportsmanship and dedication to the sport and the fire service. In other words, a person who exemplifies the spirit of the Challenge. 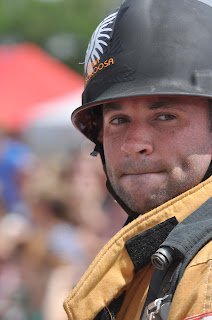 PJ Bean, 29, was a firefighter and paramedic in Tuscaloosa, Alabama, who tragically drowned in Memorial Creek in Madison, South Dakota in May of 2012. He was in Madison visiting family over the weekend and celebrating his brother's graduation from Dakota State University.

In 2011, Bean was a competitor in the Challenge on Team Tuscaloosa. Since his death, his teammates have memorialized Bean by placing stickers on their helmets, and renaming their team "Tuscaloosa Running for PJ."

Along with being awarded a life-saving medal in 2009, Bean was present and aided in responding to the devestating tornado that ravaged Tuscaloosa in April 2011.

The Scott Firefighter Combat Challenge is extremely proud to name our Rookie of the Year Award after PJ Bean, as a former member of our community. He was a brilliant example of a great firefighter, and a model for the qualities that make for a great Challenge competitor.