In Celebration of our Silver Anniversary

Being around for 25 years is a significant accomplishment. We now have athletes who were not born in the year we first started (1991).

To recognize the significance of this season, we’ve struck a new medal and a Competitor embroidery patch.

It’s only appropriate that John Pennington is displaying the three medals (gold, silver and bronze) that he won this past weekend at the Virginia Beach event.

Consistent with May’s weather, we had a great sunny Friday, followed by a wet and rainy Saturday.

The Mount Trashmore (yep- this was a former landfill) venue was ideal. Representatives from the city included the Mayor, City Manager, Fire Chief and his staff were in attendance. TV coverage of the event by the NBC local affiliate may be viewed here:

Also, the story in the Virginia Pilot may be viewed here:
http://pilotonline.com/news/local/firefighters-show-off-skills-at-competition-in-virginia-beach/article_947dd81a-aef4-5953-aa82-931cda140c2a.html

All Competitors from the Sioux Center event forward will get the embroidered patch in addition to the Scott-sponsored commerative coin. These graphics were designed by Michael DeGrandpre. 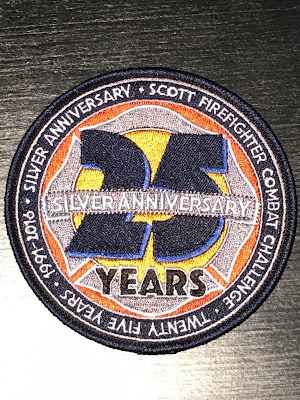