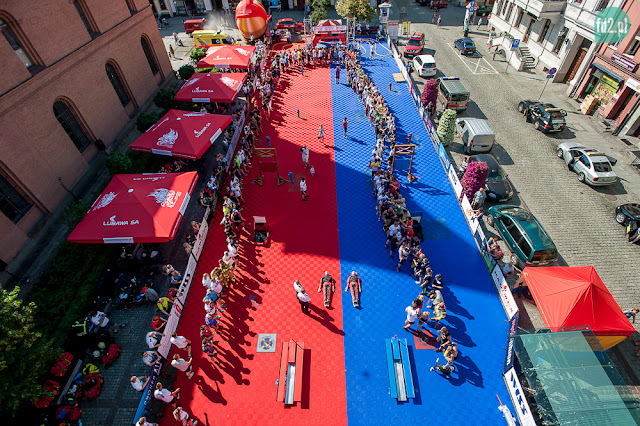 This was an extraordinary event for many reasons. First, the venue was spectacular. Torun is a city dating back to the 1200's. It managed somehow to avoid the total destruction that affected Warsaw during WWII.

I've got some video that you might want to take a look at. The first one is the Town Center, only a few blocks from the event.

A 360° look at the Town Center of Torun, Poland

Then, I shot a video of the last race of the Individual Category.

A couple of things that strike you immediately. The tiles look awesome. And, they are completely necessary since the surface is cobblestones. This is a labor-intense process. Years ago, we had tried the tile route. It's one thing to put on a single event, but you're pushing close to 20 per season, logistically, it's just not possible. We don't have the space to carry this many square feet. It does get slippery when wet. Asphalt, over the years has been a pretty consistent surface for our purposes.

The tower, built from rented scaffolding was solid. My guess is that the course is about 10 seconds slower than ours. You'll notice how they abraded tiles around the hydrants.

Working off of hydrant pressure, which I would guess to be around 60PSI, the hoses did tend to kink. But, I didn't see any evidence of accelerated wear.

I'm going to add a lot of content and tons of photographs kindly provided by Stefan Luczak. Watch this space for more adventures from Poland.