The MWR shop was a pleasure to work with; they could not have been better organized and more accommodating. 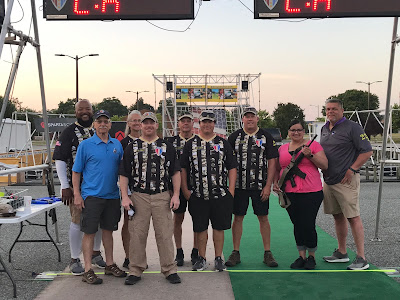 They produced rosters with contact information and made every attempt within their power to optimize our tenure. In the aggregate, we had approximately 500 runs on the course. They even made phone calls to check up on stragglers.

The sponsors all appeared to be pleased with the event- both in terms of the population and their position on the course. There was a lot of foot traffic generated for the free stuff- products that I had never heard of but would not have likely survived absent the calories of energy from some healthy alternatives to Red Bull.

We started as early as 0500 and ran until 1800. Very few hours were not used to maximize our throughput.

Coming out of a nearly two-year, COVID-enforced quarantine, it was good that we had 3 days to find all the pieces and parts and resurrect the course.

We powered up our impressive sound system and heard a loud “pop” in the amp. This was on Friday afternoon. I started with a search of Craigslist, finding no replacements turned to eBay. Found the exact model in a pawn shop in Fredericksburg. With closing time fast approaching, I needed to consummate the the deal before 1700 so Brent could pick up the unit on the way down Friday. Brent went to the office and brought with him our old Crate unit (≈1,000 watts, RMS), but we weren’t’ sure that it actually functioned. We swapped out the older QSC for the replacement, tested the Craig and now have it rack-mounted as a back up. Whew.

The “Best Time” is, of course, a constant topic of interest. Since we have gone back to our original requirement to touch all the crossbars on the “Battle Bars” the times set by USMC E-5s Verity and Cox need asterisks. These two incredible athletes have an amazing wing-span and resemble orangutans by touching the first bar, leaping to the middle bar and one-swing later are done.

There was a $500 purse for top man and women that did provide some motivation. I also believe that the top 3 male/females would be nominated for an Army achievement medal.

Being in front of the Commissary (see the 180° view: https://vimeo.com/555161463) was a great location for a lot of reasons. While the Airmen who delivered the bleachers were refractory to any direction for placement by MWR, (we wanted them to assume the Box Seat-3rd Base Line position), it was great to have a cheering session. On Saturday, 80 troops were assigned the role of calling penalties for anyone who showed the muzzle of the AR-15 through the mouse-hole shot. Did they LOVE that mission. It was hilarious. Especially when they were able to gig their drill sergeant. The only thing missing were the cabbages or rotten tomatoes that they could have hurled onto the course. And then, the DI failed to set his rifle on “Safe’ a two-second penalty. The place went wild.

I could not have been more pleased with our new shooting solution. We are no longer dependent upon any outside organization. The Mantis-X Blackbeard performed flawlessly. Best of all, being a laser in the green-light spectrum, shooters had instant, positive feedback on target acquisition. The yellow ScotchLite target, approximately one-foot square was not unlike an LED when struck by the beam. In our prior experience with the IR- shooters did not have the same level of confidence (nor did we).

The sound-effects however did not work- a minor point. Turns out that the 3M product is designed to return almost all of the energy from the point of origin. Our smart phone monitors that produce the rifle report (and brass hitting the ground) needed a scatter effect to activate. So, we’ll figure this out for next time.

We have assembled our own inventory of AR-15s and were provided gun cases by our sponsor SKB cases.

I had conversations with the Four-Star (Paul Funk II) and and the Two-Star (MG Lonnie Hibbard) Generals who were both effusive in their praise and wanted to see more of us. In fact MWR has already requested a return engagement next year. We had extended conversations about the ACFT and the value of the Battle Challenge in affirming the validity of the test components. A considerable amount of our conversation was a topic close to my heart: scientifically validated performance standards (where the mission comes first and the social engineering follows).

No known loss-time injuries- including the free-fall of Eddie the Eagle, the flightless base mascot bird (now on Vimeo: click here: https://vimeo.com/554953441). A few of the participants were hurling on the trees on the median strips post-event. But that always happens. Cops and firefighters, even wives(and their progeny) took a turn. Some of the MWR people never held a rifle and were pleasantly pleased to hit the target with very little instruction. No bang or recoil removes some of the hesitancy to pulling the trigger. 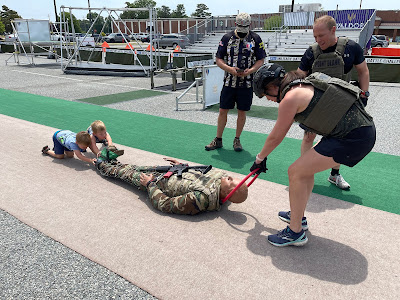 I spent a lot of time talking to the participants and never met a finer bunch of engaging people from all over the place. It’s great to hear how they got to where they are. A Captain was wearing a Surface Warfare Qual Badge- something you don’t see every day. He was prior Navy and wanted to be a frogman. When his time came, they cancelled the BUDS class so he transferred to the Army to go into SpecOps.


We are working on a punch list for the future. Handing out numbers might help eliminate having to stand in a very long line. Also, developing a system that captures Rank and Name - such that can be conveyed to our announcer would be a nice touch. The sweetest thing to the ear is hearing one’s name over the PA; (assuming that it’s not in connection with an indictment.) Huan did yeomen’s work keeping everyone informed and the competitors motivated.

LTC Carl Ey, USA (ret) to his credit, pulled this together. I have no idea as to the finances. He’s already cut the check and asked that we hold it until he gets his money this week. Good news.

We’ll have photos and videos going up. Brent did a live-feed to Facebook.

Here’s the piece d’restance: The fastest time was posted by a member of the Montgomery (AL) Fire Department’s World Record Holder Firefighter Combat Challenge® Team Blue. Cody Thompson is a Guardsman and was on post for AIT. A blistering 1:26. I have the splits elsewhere and will put out more information on this topic. The best time for a female as 2:10. She was impressive; clearly a 6-sigma performance and didn’t even look winded. The next closest female was a minute and ten seconds slower. 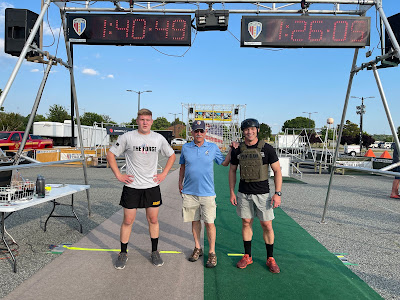 The ABC local affiliate did a nice piece: and the Virginia Pilot wrote an article. (https://youtu.be/1_9XQb7xevM)

We have video of these runs and will put it up on the website and Vimeo. Cody never expended one calorie more than required to surmount any obstacle.

One of the take-aways is the ability to find the Alpha Males vs. the suits doing their version of “mandatory fun”. If you needed a seletion tool for motivation, this is it. From the siren start, the hard chargers do exactly that: charge hard in a full-on sprint down the carpet.

We now have established our sea legs, document via photography and video all of the set-up and protocols.

I could write a lot more - and I will- of lessons learned and look forward to our next outing to implement the tweaks.