Men of a Certain Age 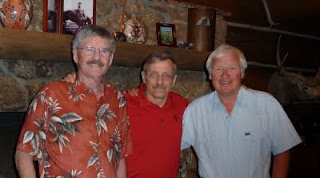 In 1974, my friend and fellow firefighter Willie Barreto and I swung our legs over our motorcycles and headed South for the University of Tennessee where the 20th Annual Meeting of the American College of Sports Medicine was being held. My fascination with exercise science would take me on a intriguing and circuitous route. As a graduate student, funding for travel was always a challenge and the hospitality of the Knoxville Fire Department helped defray costs. There may have been 300 scientists at the meeting, but I was in sensory overload. Last week, I attended the 58th annual meeting in Denver. Over 6000 of the more than 25,000 members attended the five-day meeting.

Now a fellow and card-carrying member of the organization, I was looking for familiar faces in this sea of physicians, educators, researchers and all-around cool people. Their joie d’vie is infectious and the breath of knowledge was not unlike attempting to drink from a fire hose. But there are two members in particular that I was looking for: Dr. Jack Harvey, team physician for a bunch of Olympic, professional and scholastic sports, and my co-author of our book, Hard Work, Dr. Brian Sharkey.

Jack’s accomplishments both within his profession and his extra-mural activities could be the subject of a major motion picture. Over the past 20-plus years we’ve telly-skied, ran and mountain biked the Rockies- much to our mutual satisfaction. Jack was helpful in writing up our medical guidelines for treatment of Firefighter Combat Challenge competitors who were in over their head.

Brian, in addition to his tenure with the University of Montana has been intimately involved with health and fitness issues for the US Forest Service wildland firefighting community as well as the US Nordic Ski Team. As a research associate, he worked closely with me on my nearly six-year USMC project, conducting one of the most comprehensive, multi-environmental physiological overlay studies of of its kind. His professional contributions include the pack test, now a standard for getting your Red Card- the “good to go” benchmark for wildland firefighter.

The three of us would capture one of those rare opportunities to connect at Jack’s ranch and swap stories and reminisce over great food and adult beverages. Our recollections of events of the past become more woollier with each retelling. Our scars are like tattoos, but with more interesting stories.

The following day, I would head to Ontario for our fifth event of this season. Again, I would meet friends and Challenge competitors such as Walt White and John Walka who have been a part of the SFCC for 20 years! Incredible when you think about it. Participation in the Challenge can be a life-changing experience, as attested by one of this week’s competitors who lost over 30 pounds in his quest to find a new life.

In reflecting back upon the people who have helped in so many ways, I can say that the friends that I have made along the way are precious and valuable in so many ways. The collective energy of people who are winners is contagious. The common thread that seems to bind this community together is not just the relentless pursuit of athletic excellence, but the camaraderie that takes place outside of the banner line. As a consequence of their involvement, friendships have been forged that span the continent and even the globe. I hope that you’re getting your fair share.
Posted by Paul O. Davis, Ph.D. at 5:10 AM