After a woman gave birth at home, firefighters shoveled her driveway to get the ambulance through
By Lindsey Bever, January 29


There was no time to make it back to the hospital. Cassy Abram, who was 37 weeks pregnant, and her husband, Scotty, had spent the night in a hospital in Iowa, but by Monday morning, the physicians had concluded it was simply not time for her to deliver the baby, she said.

The couple, from Cedar Rapids, fought freezing temperatures and snow-covered roads to get back home. Minutes later, the baby was on the way.

Cassy Abram told her husband to call for an ambulance, but before he could make the call, she had delivered their son on the living room floor. “It was crazy,” Cassy Abram, 28, told The Washington Post. “I don’t know how else to explain it.”

It had been a joyous — albeit stressful — morning, but the Abrams said that when Cedar Rapids firefighters arrived, they made it even more special. While several of them tended to the mother and baby inside, two others responded to the scene in their personal vehicles and shoveled snow from the couple’s driveway so Cassy Abram and her baby could be taken to the hospital.

Cassy Abram’s aunt, Larissa Ruffin, was on the phone for the birth. It was about 6:30 a.m. when Cassy Abram started to deliver and told her husband to get help. He called Ruffin.

“He said, ‘Help me!’ ” Ruffin recalled, saying that she could hear Cassy Abram screaming and crying in the background. “I told him, ‘Call 911!’ ”

Suddenly, Ruffin said, she heard him say, “Welcome to the world, baby boy,” and she heard the newborn cry. “I was so confused,” she said.

Just like that, Ruffin said, Scotty Abram Jr. had been born. Ruffin said her niece cleaned out the baby’s nose and mouth, and Scotty Abram called 911. When first responders got there, Scotty Abram cut the umbilical cord, and the firefighters evaluated the mother and child.

Cedar Rapids public safety spokesman Greg Buelow said that upon arrival, firefighters put out a call for another crew to clear snow for the ambulance, and two other firefighters showed up in their own cars. Buelow said the firefighters, Bryan Johnson and Jason Aarhus, shoveled the entire driveway.

Buelow said the “heartfelt” gesture was “an example of the dedication and compassion of the firefighters we have working for the city of Cedar Rapids. They truly care about the community."Ruffin said the mother and her newborn were taken to the hospital by ambulance and are doing well. The Abrams are planning to bring Scotty Jr. home on Wednesday, Ruffin said. 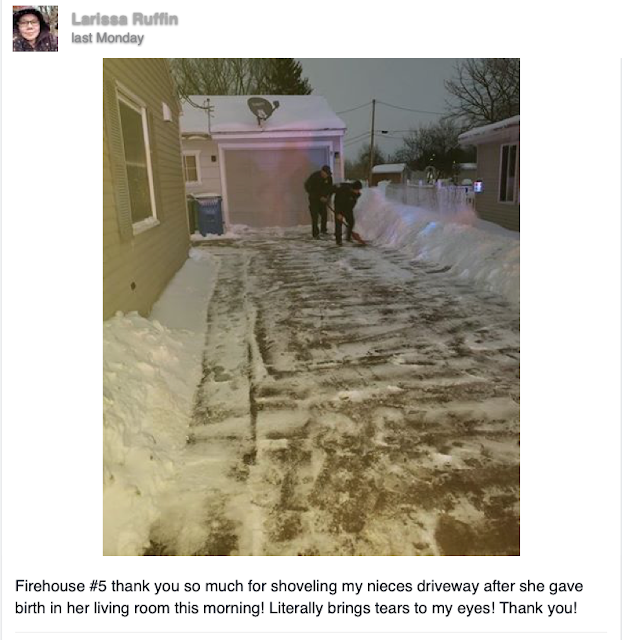